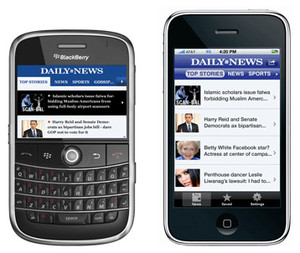 “Mobile should be frightening to most of us,” said Clark Gilbert, president and CEO of Deseret News Publishing Co., “partly because the revenue potential is maybe a third [of total revenue], maybe worse than that.”

News organisations are falling pitifully short of this potential, largely because they are focusing too much on mobile advertising, which will never be a major revenue source. Less than 1 percent of news organisations’ total revenue came from mobile ads last year, according to the Newspaper Association of America. Every $100 in advertising spent offline is equivalent to just $1 spent on mobile, Michael Wolff reported.

Rather than simply resigning and accepting that “there is no way even a stripped-down … newsroom can support itself in a mobile world,” as Wolff said, news organisations must look beyond advertising to profit from mobile.

“The sole issue that we should all be thinking about is how we are going to monetise as we move into mobile,” David Payne, chief digital officer at Gannett Company, told the Media Briefing. “[…] Without question it’s our biggest challenge.”

In response to this challenge, here are three innovative ways news organisations are monetising mobile.

About 56 percent of smartphone owners have never purchased digital content using their mobiles, according to the Deloitte Consumer Review. Andy Bovingdon, VP of product marketing at mobile payments firm Bango, has a theory why: It’s not easy enough.

Bango allows consumers to add purchases to their mobile phone bills, a process that is much easier than digging out a credit card and manually entering its information. These laborious steps can prompt potential purchasers to lose interest. Instead, the ease of paying by SMS, which works well for TV talent show voting, can also work for news organisations, the Media Briefing reported.

More people may be likely to make purchases if they know their employer is footing their phone bill, Bovingdon said. Moreover, phone bill payments also appeal to individuals that avoid putting small charges on their credit cards.

“If I go into a store and buy a pint of milk it feels wrong to put in on your credit card,” Bovingdon said.

News organisations can make particular use of this process for content that is unavailable on an app store, such as one-off special reports or subscription-based breaking news SMS alerts.

Even if consumers aren’t paying for news content by smartphone, 31 percent of people make purchases by smartphone every month, according to the Deloitte Consumer Review. With e-commerce, news organisations can take a cut.

E-commerce revenues were up 20 percent for publishers last year, according to Newspaper Association of America data. But many publishers have not realised retail’s full financial potential, especially considering the personalisation mobile purchasing allows.

Smartphones provide a treasure trove of data — geographic location, social media connections, search history. News organisations should make use of this information: “The minute they log in, readers expect mobile content to be automatically tailored to who they are and where they are,” wrote Mark Challinor for the International News Media Association (INMA).

If news outlets can extend this personalisation to e-commerce, they will profit. Amazon has shown how powerful data can be: Using data, it doubled its ad revenue in two years alone, and its ad profits have now eclipsed those of the entire New York Times Company, INMA reported. Amazon hand-picks products for users based on others’ purchase histories, and if news organisations personalise their e-commerce ventures similarly they’ll see profits rise.

Deseret News Publishing Co. has capitalised on this opportunity and now generates half its revenue through e-commerce ventures, Gilbert said in a Newspaper Association of America mediaXchange 2013 panel.

Publishers have realised there’s money in marketing their own news apps, but the Dallas Morning News has taken the revenue-generating venture a step further by selling third-party apps.

Grant Moise, vice president of digital, said The Dallas Morning News is “doubling down, if not tripling down” on creating and selling mobile sites and apps. The idea is to find a locally-based app developer, buy their products and resell them for a profit, he said in an NAA mediaXchange panel. News organisations can also offer a service of building mobile sites for their advertisers in this way.

“We don’t have to just sell the pathway there,” Moise said. “Go sell where these folks are going to land once they click on the ad in your media asset.”