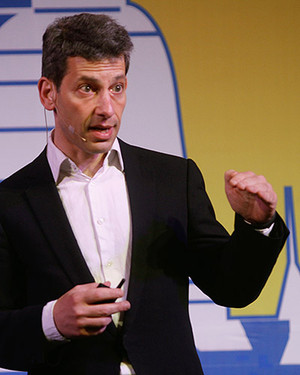 As an example of the new generation of entrepreneurs, he cited Elon Musk, who has ambitions to go beyond electric cars (Tesla) and solar power (Solar City) to travel to Mars. He mentioned Matternet, which is trying to create a physical Internet using drones, and the Khan Academy, which aims to help anybody learn what they want, when they want.

Every sector is being remade by software, Rowan said, quoting Marc Andreessen, and by access to hardware. The democratisation of technology means that people can now build their own drones that fire weapons, and traditional human roles such as journalism and translation can now be automated.

He stressed the importance of focusing on mobile devices, pointing out that there are three times as many people getting smartphones delivered every day now as there are babies being born, and that global tablet sales have overtaken desktop and notebook PC sales. “You have to see mobile as your biggest opportunity and understand how it’s changing people’s behaviour,” he said. Research shows that people check their mobiles an average of 150 times a day.

Rowan showed videos of frustrated babies trying to swipe and click on print magazines to show that the next generation might have fundamentally different expectations.

“There is as much demand as ever for journalism to hold the powerful to account, but the business model is under massive challenges,” Rowan said. News organisations have value, but they need to find a way to subsidise that value. Conventional advertising is less and less capable of providing this subsidy, and advertising will not be the future for most of us, he said.

He suggested some alternative revenue streams that news organisations could look at (conveniently, many begin with a ‘c’):

You must not be afraid of failure, Rowan said. He advised delegates to take another lesson from startups: If something doesn’t work, don’t see it as a failure but as a chance to ‘pivot’ and change strategy. Plenty of companies have done that successfully, he said, such as Bic, which went from just making disposable pens to all sorts of disposable items.

“Business disruption is now the norm – we can’t relax,” Rowan said. We need to keep looking at what startups are doing, and keep talking to 16-year-olds about their media habits. Exponential organisations iterate quickly, have scalable processes, use the crowd, go global and have a real mission, he said.