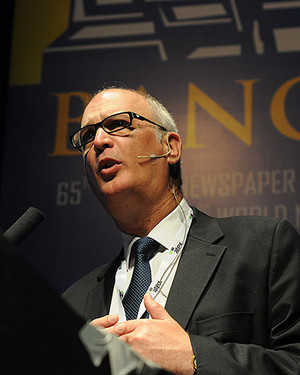 “One of the things we’ve had to absolutely learn in the last 15 years is that we can’t do everything – we have to focus,” said Beatty. DMG has had to sell a number of its local and regional newspapers to consolidate its assets in core areas. This strategy of divestment was complemented by acquisitions of new properties, such as Job Rapido, and heavy investment in new sets of skills and digital operations.

As a result, DMG managed the increase its revenues by 3% in 2012, despite the challenging economic climate.

“We saw it was absolutely possible to compensate for print revenues at a time when the economy was on its knees,” said Beatty. “This is incredibly encouraging.”

“Our newspapers still remain the bedrock of our business,” he said. Metro, DMG’s free newspaper, reached its highest level of readership and profit in 2012.

By 2015, direct circulation revenue will still contribute the largest share of DMG’s revenues, at 38%.

But the other part of the story comes from digital revenues, which are predicted to surpass print ad revenues by 2015, with a share of 29% (28% for print ads).

MailOnline totals 6.63 million visits daily – a number that has risen to 10 million in recent months. MailOnline leads UK news sites and at the international level competes closely with NYTimes.com for the title of largest newspaper site in the world, with 46 million unique visitors per month.

But traffic alone is not enough. “We wanted a level of engagement expressed in time spent comparable with the levels seen in print.”

Fortunately for MailOnline, its readers are very engaged, and a large share of online readers come through direct traffic. “A customer who makes a conscious effort to visit stays about six or seven times longer, and is consequently more appealing to advertisers.”

MailOnline’s team also pays close attention to real-time analytics. However, “it’s not about producing content for Facebook, Google, or others,” said Beatty. “These are just means to reach new visitors.”

Instead, real-time analytics enable editorial staff to tweak online content, such as cover photos and story excerpts, for big news items that are not getting sufficient traction.

As a result, MailOnline can also boast the world’s highest level of social engagement and virality among all the leading news providers.

“There’s a long debate about paywalls and paid access.” But according to Beatty, “You can either serve a niche and charge, bundle print and digital together, or can, as we have chosen, go at new customers in scale, and stay free.”

Another factor in MailOnline’s success has been its reliance on user data for effective advertising. “Understanding consumers’ behavior is critical to our behavior,” said Beatty, referring to the wide array of data now available to news organizations through their customers’ digital usage: information about their topical interests, recent searches and needs, location, as well as social relationships.

Beatty concluded with some important reminders to all news organizations:

“But most importantly, recognize fast what you do not know.”