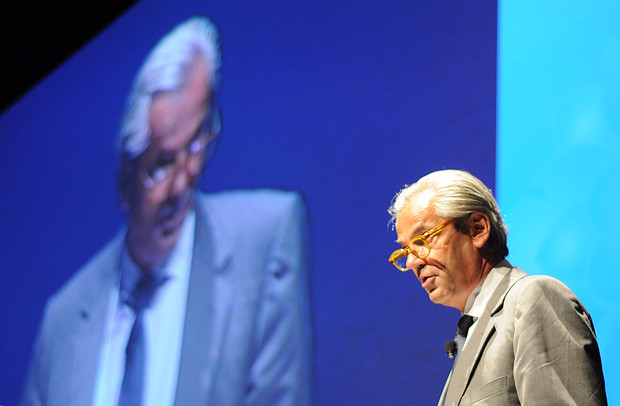 “Europe is in an economic crisis and in many countries in Europe we see recession,” he said. “We are also in the middle of a structural change from print to the Internet. These two factors have a very strong impact on our industry and unfortunately, a very negative impact.”

While European publishers are seeing declines in both revenues and circulation, these vary considerably depending on the country, Trevisan said. But there is a positive side as well, he said.

“We have seen a huge increase in the numbers of readers on our websites, and I think we can say we have been successful in transferring our brands from print to digital, but unfortunately, only have a few have been very profitable,” Trevisan said.

He said the discussion that will dominate our future is “How can we produce products that are more attractive to our readers, especially for mobile devices?”

Offering a brief history of his company, Trevisan said FAZ was founded in 1949, and 10 years later it was brought into a non-profit foundation, which ensured the financial future of the paper.

Soon afterward, the newspaper became the quality leader in the German newspaper industry and one of the most important voices in the western world.

“In Germany, FAZ is an institution,” Trevisan says. “Many people might disagree with what we have to say, but nobody wants to miss us. We have an important responsibility and obligation to keep the newspaper independent – and this means profitable.”

In recent years, the FAZ has invested in its digital business and in other areas as well, he said.

“Looking forward, I see our strong brand helping us get into new businesses in the digital world and the real world,” Trevisan said. “This is what we have to do, and we have to do it very quickly because Europe does not have enough young people.”

For now, Trevisan says, “Newspapers in Europe still have very high penetration in the baby-boom generation, and this is the most important target group for advertisers, but we need to build new businesses.”