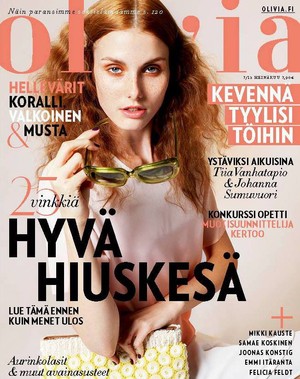 Stanford researcher Tanja Aitamurto studied the collaboration during a four-month period leading up to Olivia’s January 2012 issue, and she said her discoveries surprised even the journalists involved in the project. MyOwnOlivia (Oma Olivia in Finnish) presented a number of obstacles to the magazine’s editorial workflow, but its benefits ultimately outweighed them.

The platform relies on a point system, where readers are rewarded for successfully completing “challenges.” Projects that generate content for in-depth features are comprised of seven steps, including pitch a story idea, pick an angle, list interview sources and questions.

In this way, the platform integrates readers into the editorial process. While several other publications have filled entire issues with user-generated content, Olivia staff members ultimately write the pieces. However, self-dubbed MyOwnOlivians keep up-to-date with stories’ development on the site.

MyOwnOlivia attracts an average of 5,000 unique weekly visitors, and the magazine itself has a circulation of 130,000. About 900 users are registered through the platform, Aitamurto reported. Co-written stories resulting from MyOwnOlivia account for about 15 of each issue’s 50 pieces.

Points can be cashed in for prizes including Lancôme make-up, a €400 gift certificate to Samujin, a spa day and a home-cooked dinner by a prominent chef.

“I think that MyOwnOlivia is a bit like a coffee shop, which you can pop in for a moment during a day of housework,” the site says (translated from Finnish). “I hope you feel the same way. So, take a mug of a hot drink (or a glass of a cold one), relax, and let us know what you think.”

The Olivia journalists went through a learning curve following the project’s launch. Here are some tips based on Aitamurto’s research and her write-up.

1.  Journalists must be heavily involved in the platform.

Olivia staffers were at first spectators rather than active participants on MyOwnOlivia. They struggled to find time to integrate the site into their daily workloads, and some of the journalists were unsure of how to communicate with readers on the forum, worrying that using the wrong tone would be off-putting. But their silence upset MyOwnOlivia readers even more.

“All in all, there is a feeling that the journalists are not present,” one MyOwnOlivia user blogged. “You can’t see them in conversations and you can’t connect with them. The readers have been left among themselves to discuss with each other.”

When Olivia staffers began taking a more active role, encouraging discussions with follow-up questions and complimenting ideas, comment quality increased. “Co-creation works best when you build a strong community,” Stefan Stern noted, adding that contributors tend to build off one another’s ideas and in this way improve the quality of conversation.

Journalists also have the responsibility of keeping contributors “energized” and busy with meaningful projects, Stern said. It’s best to avoid regurgitating mundane polls and instead offer exciting projects to preserve the site’s momentum.

2. Contributors may not be your “ideal reader,” and that’s OK.

Staffers’ image of the typical Olivia reader changed during Aitamurto’s study. Journalists found the MyOwnOlivians with which they collaborated were not the “ideal readers” they had envisioned as subscribers: educated, cosmopolitan women between their late-20s and 40s. This gap between expectations and reality led the journalists to devalue reader submissions at first, as they worried that following their guidance could degrade the paper.

However, after extended collaboration with the users, the journalists eventually came to value their submissions. They, in turn, also got a better understanding of their audience and what they want to see in the magazine. For instance, until MyOwnOlivia, staffers did not recognize a desire for work-related stories, which users emphasized.

Olivia staffers were initially concerned that accepting contributions could redefine the magazine: What if readers wanted something outside of the editorial concept?

But the issue didn’t end up troubling MyOwnOlivia, as readers themselves realized this limitation.

“One person has only restricted power over the choices,” a contributor wrote. “If I want something, it won’t be realized exactly the way I want it to be. And in the end, it is the editorial staff that decides what will be in the magazine. … They won’t be punished if they don’t follow the will of the crowd.”

Moreover, the MyOwnOlivians ended up policing each other, remarking that one idea or another was “not Olivia-style” or that it “doesn’t fit into the concept.”

The journalists also worried that readers would be disappointed if they did not print their submissions, so stories included excerpts from MyOwnOlivia. The result was poor journalism that neither the readers nor the writers were proud of. Both called the stories “scattered” and “shallow.”

Contrary to the journalists’ beliefs, the contributors did not expect to be quoted. They merely wanted to be heard and to know that their opinions were influencing editorial decisions, Aitamurto’s research suggests. Even if their names or their words do not appear in print, readers derive value from being included in the process.

The best practice to ensure both quality journalism and a continued relationship with readers is to integrate reader ideas — not necessarily their words — into a larger narrative. Stern said that synthesizing contributions and fitting them into your vision is “the real art,” sometimes a puzzle-like feat.

One-step “challenges” proved more feasible for the Olivia journalists and readers, as they require less time and commitment from both parties. This form of crowdsourcing allows readers to feel involved but not overwhelmed.

For example, MyOwnOlivia has prompted users to submit a list of favorite songs and vote for the best column. These one-time-only challenges would be an easy foray into co-creation for newsrooms.

The argument for size also translates to the number of users. Stern said a smaller, tight-knit community of contributors is worth more than a giant one.

5. The payoff is worth the effort.

While the co-produced stories took more time than the average articles, Olivia found a number of benefits to the process. For one, it reinforces readers’ loyalty. Several MyOwnOlivians renewed their subscriptions after participating, and one subscribed for the first time.

“I feel like I belong to the magazine somehow,” one MyOwnOlivian wrote. “Now that I have participated and shared my thoughts, it feels like it is my own magazine more than any other magazine.”

Proud of their contributions, users spread articles on social media, which drove up page views and ad clicks. Thus the platform has potential to increase both subscription and advertising revenue.

Additionally, the platform served as a “huge focus group” that collected a gold mine of story ideas, the journalists told Aitamurto. Directly communicating with readers gave staff a better understanding of what they’re searching for in the magazine’s pages, better allowing them to deliver that content. For this reason, the publication has continued to rely on the platform since its launch in 2011.