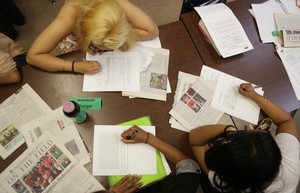 Nationally, about two-thirds of public schools have newspapers or journalism classes, according to a 2011 media study cited by The Times.

Among schools that have upheld student newspapers, many have reduced the frequency of publication or moved content entirely online, The Times’ Winnie Hu wrote. Others have eliminated journalism classes and made newspaper production an after-school club, often forcing students to give up other extracurriculars.

Student newspapers are struggling to confront the same difficulties that plague professional ones: rising print costs, budget cuts. Additionally, increased focus on standardized testing scores has led to a dismissal of electives to focus on core academics.

Another major reason for high school newspapers’ trouble is student apathy. Indeed, a California high school cited declining participation as a reason for closing its journalism program next year.

“Facebook is the new way of finding out what happened,” high school senior Rebecca Dwarka told The Times. “Nobody wants to actually sit down and read a whole article about it.”

This attitude will affect newspapers beyond their job applicant pools. It suggests that young adults “raised on a diet of Internet posts and instant messages may be unlikely to be future newspaper readers,” Hu noted.

“If we don’t even have a newspaper at this level, how are they going to develop a love for it?” said Joshua Sipkin, former advisor for a now-closed student newspaper in New York. “Most kids aren’t even aware of newspapers unless they’re handed a free Metro New York.

Moreover, a major chunk of the schools without newspapers are from areas with a large minority base, a fact that will likely perpetuate the trend of minority underrepresentation in the media, according to The Times.

In addition, having fewer student newspapers will significantly decrease the country’s education reporting, noted Frank LoMonte, executive director of the Student Press Law Center. In a 2011 blog for The New York Times, he pointed out that only 1.4 percent of news coverage is focused on education, and, with strict school regulations keeping reporters from hallways, students tell important stories professional reporters can’t.

Of course, just because high school newspapers are closing doesn’t mean students will stop reporting and sharing news. It just means their work will be without the judgement, style, ethics and accuracy that comes from journalism classes, noted former New York Times editor Jack Topchik.

“Truly good journalism is a craft, not just a blog post,” National Public Radio’s Scott Simon said in response to The Times’ story. “It requires not only seeing something close-up, but also reporting it with perspective. It uses an eye for detail to help illuminate a larger view. And even journalism that conveys an opinion strives to be fair.

“If school newspapers begin to disappear, I hope there are other ways for students to learn that.”

The Times‘ article is less a harbinger for the future of journalism than an indication of the state of school systems in low-income areas, said Kelly Furnas, executive director of the Journalism Education Association.

“You could have just as easily replaced ‘student newspaper’ with ‘foreign language classes’ or ‘arts’ and the article probably would have read the same way,” she told College Media Matters.

Many argue that should school newspapers fold, the effects would reverberate beyond the journalism industry. The industry’s uncertain future, the reason one Kansas school gave for almost cutting journalism funding, does not undermine the fact that high school newspaper experience “remains a proven pathway to college and career success,” said LoMonte.

And the social benefits are many, as Devan Coggan, a journalism major at Northwestern University, recognized during her time on her high school newspaper. She said that her newspaper served as a safe space from the difficult and often scary high school hallways.

“It’s an environment that encourages young adults to take risks and be individuals in a high school hierarchy that teaches the opposite. …  I’ve seen kids who wouldn’t say a word in class find their voice as artists, photographers or writers,” she wrote. “If that doesn’t deserve a medal, I don’t know what does.”