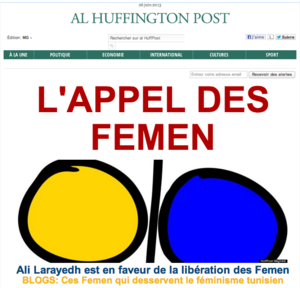 As its title indicates, the eighth addition to the Huff Post family, with journalist Kader A. Abderrahim at the helm, will cover news and events from the North African region dominated by Tunisia, Morocco and Algeria (though some commentators on huffpostmaghreb.com are irritated that Mauritania has been left off the list of Maghreb nations). Each of these three countries will eventually have its own team of 6-8 professional journalists, though for the moment only the Tunisian editorial team is up and running, under the leadership of Houeida Anouar. Writers and bloggers from around the region will be invited to write for Al Huffington Post Maghreb and prominent figures from the world of journalism, the arts, politics and culture, including Ihsane El Kadi and Raja Farhat have already contributed to the inaugural edition of the site.

Yet the blog post published by Ms Huffington to announce the Maghreb version of her international news brand hints at a slight departure from the often sensational form of journalism and celebrity pieces that characterised the earlier editions of the site. While a quick glance at the UK version (the first step beyond the U.S in the Huffington’s bid for global expansion) on Wednesday morning led to a homepage dominated by the headline “Page 3 Will Stay” and photographs of the British Chancellor with the words “Osborne snapped with coke on table“, the latest Huff Post scion seems rather more serious in tone. Wednesday’s lead story is the trial of three Femen activists in Tunis, a report that corresponds with the emphasis Huffington placed on issues of democracy and freedom in the Arab world during her introductory blog post. Referring to the Arab spring, Huffington writes: “The changes in the region have created a new generation of citizens, electrified by all the new possibilities. Al Huffington Maghreb wants to tell and share their stories… there is a tremendous opportunity for Al Huffington Post Maghreb to do its part to contribute to the consolidation of the region’s young democracy. It’s an opportunity underscored by the countless bloggers already at work in the region, at a time when free expression is not a given, but more of a work in progress.”

It is not new for the Huffington Post to position itself as a champion of free expression and political dissent. At the Japanese launch, the online publication’s chief executive, Jimmy Maymann, claimed that “Over the last couple of years with the different scandals they’ve had politically and with the nuclear disaster, people have lost faith in a lot of the traditional news channels and politicians. It feels like a time when people really want to have a voice.” Now the rhetoric of ‘conversation’ and cultural exchange has been further amplified in relation to the new edition. The content produced for the Maghreb edition will soon be available in a multitude of languages, including Italian, Spanish, Japanese and English, “so that the reach of the voices from the new democracy can be truly global,” Ms Huffington has said, reinforcing the idea that this version of the site will be a platform for lively debate and the exchange of opinions, championing values of freedom and openness.

It would also appear that Al Huffington Post Maghreb has deviated somewhat from the usual business model followed by the Huffington Post. Since the UK version, which has seen lower traffic than its sister sites – the result many believe of a decision to develop the British version without the collaboration of an established media organisation – Huffington Post has since always sought to ally itself with respected news outlets in the countries it targets: Le Monde in France, El Paìs in Spain and Gruppo Espresso in Italy. Al Huffington Post Maghreb however was launched in partnership with investors Alix Etournaud, a French journalist whose husband is a shareholder in Le Monde, and Tunisian businessman Farès Mabrouk. These two investors originally pitched the idea for a Maghreb Huffington Post to Arianna Huffington after seeing the success of Le Huffington Post in France. Launching independently of existing press outlets in the region could, in this instance, add credibility to the title’s stated desire of providing a new, independent voice to North Africa’s burgeoning democratic movements.

That said, the arrival of Al Huffington Post Maghreb before a German Huffington Post goes live at the end of 2013 is, above all, the next rung of the ladder for Huff News’ ambition to become an even more attractive prospect for advertisers. Commenting on Huffington Post’s impressively swift expansion into Europe and beyond over the past two years, Maymann is quoted as saying “We need to open in more markets and build more scale in the ones we are in. There is huge demand for digital networks that can deliver ad campaigns across 10 or 15 markets.”

With a ninth edition in the pipeline, the Huffington Post is well on its way to doing just that.