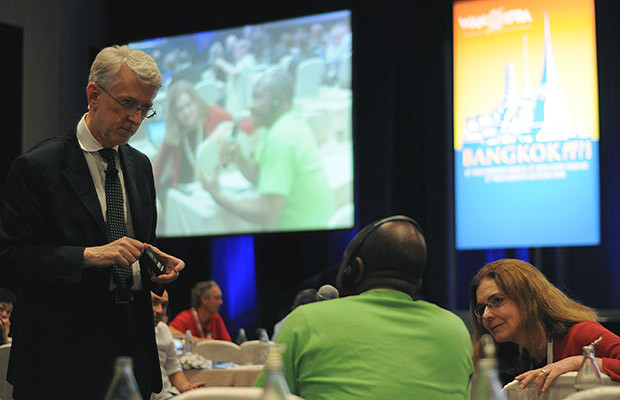 He stressed the need to challenge our fundamental industrial-age assumptions about the news business.

What if we were not in the content business, he asked. It’s not that we should stop producing content – but if we consider ourselves as being in the content-production business, we structure everything around manufacturing content and obsess over the value of our content.

By contrast, if we think of news as a service, that changes our relationship with the public. We start thinking about what the public want to know, Jarvis said. Moreover, media don’t have to be mass-oriented any more; it’s now possible to serve people as individuals, as companies such as Amazon and Google do.

Jarvis cited examples of smaller newspapers that calculated the value of their readers. They realised that the readers inside their core market were worth 25 times as much as those outside. Unfortunately, many news organisations don’t even know whether people are inside or outside their core markets, he added, suggesting: start with small data. Where do readers live, where do they work? You can target them based on that. Small data can start a relationship, he stressed.

Many news organisations talk about building communities, he said, but that is the wrong way to think about it. Communities already exist. Instead, you should be asking how you can help them do what they want to do better. Facebook helps friends share what they know with one another.

Ask questions that are not in the flow

In digital form, punctuated with links, tweets, and more, an article becomes deconstructed into assets and paths, Jarvis said. There is a constant flow of information, and where journalism can add value is by getting answers to the questions that aren’t in that flow. We shouldn’t be providing the commoditised information that everybody already knows, he added: “We still need to add value.”

It’s also essential to remember that you can’t deliver everything to your local market, Jarvis said. People don’t expect world news from their local paper. Specialise and get better at what you do, he said, repeating his now-famous phrase, “do what you do best and link to the rest.”

A heretic in the paywall church

“Sometimes I feel a bit like a heretic in the church of the paywall,” Jarvis said. He believes that news organisations can sell some content – but that paywalls are definitely not the salvation of the news industry.

Information is the most valuable thing we have in journalism, Jarvis said, but it is hard to grasp and put a price on. Entertainment is easier to charge for, and you could count a piece like The New York Times’ Snowfall as entertainment, but then you are competing with an array of other media.

One of the problems with many paid-content efforts is that they end up charging just the most loyal readers. Those readers are already valuable, so why punish them for that? He suggested instead a kind of ‘reverse pay meter’ that rewards engagement. Jarvis also warned against thinking of sponsored content as a golden pill, saying it would be foolish to risk the valuable relationships you have with readers.

“We don’t know what the Internet is yet,” he added; it’s too soon to know. It’s time to experiment, try things and build new relationships with the public, he said.