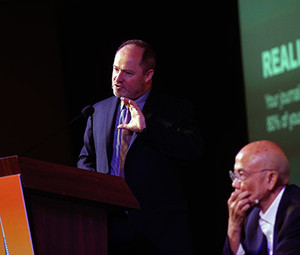 Speaking in a session on “Leadership lessons to survive and thrive” at the World Editors Forum in Bangkok, Halls stressed that there are no magic formulas for changing newsrooms, and no matter what approach you take, transformation is very hard work. In the post-industrial newsroom structure, authority is not the dominant force for a leader, it’s responsibility.

Leadership in times of crisis

Andrew Holden, now editor-in-chief of The Age in Australia, was editor of The Press in Christchurch, New Zealand, during the 2010/11 earthquakes. He showed delegates the 14 different newsrooms the paper moved to in six months after its building was destroyed, and advised fellow editors on how to lead the newsroom at such a time.

His first recommendations for crisis coverage were about preparation: prepare your family for the fact that in a time of crisis you are obliged to be with the newsroom, and prepare your leaders in the newsroom in case you can’t be there.

“Be human,” Holden said. “You won’t have all the answers.” He also advised editors to be honest, and to remember that the best support comes from your own colleagues.

“Let your staff do their job,” he stressed, warning against editors suddenly deciding to take over the front page when a crisis hits. The editor should adopt a more outwards focus, he said, “your community will want to hear from you.”

El Pais had some very difficult months in 2012 due to severe financial challenges. Since 2008, circulation at the Spanish daily has plummeted, and the revenue drop has been staggering, Editor Javier Moreno Barber said. “We were fully unprepared for that change,” he said, and the paper laid off close to one third of its newsroom, 129 out of 456 staff.

“Layoffs are the hardest news for an editor to deliver to his or her newsroom,” Moreno said. “There is no way to avoid the anger and fear, no matter how you handle it.” There are several lessons that the paper learned (“the hard way”) that he shared with delegates:

It’s essential to convince your people that cuts are manageable if you keep your ultimate goal, Moreno added. Journalists need to see that you are convinced by your mission, and that you won’t back down, ready to fight for survival, he stressed.

To read an interview with Javier Moreno Barber, see here