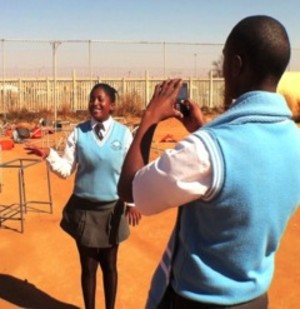 Lisa Blakeway, executive director of Vuselela Media, and two-time winner of WAN-IFRA’s World Young Reader Prize presented “B media Ys”, a new South African video journalism project that allows adolescents aged 16 and over to have a voice whilst also learning important lessons about the news industry.

The project has two training levels. One-day introductory courses taught in schools teach basic storytelling skills including writing, shooting and editing hyperlocal stories about their communities. Young people use basic mobile phones with a video function to create their own video content.

Those who make the best clips are invited to attend a three-day intermediate course at community youth centres, where they use an entry-level video camera and sound equipment to make more elaborate features, and also to conduct interviews and a public service announcement.

The project was carried out as part of the European Journalism Centre’s (EJC) five-year Netherlands Foreign Ministry-funded project ‘Press Freedom 2.0’. WAN-IFRA advised on the journalistic aspects of the approach.

“We must absolutely teach children and teenagers about journalism, how to appreciate it and how to do it – if we are to have a youth audience ever,” said Aralynn McMane, WAN-IFRA Executive Director of Youth Engagement and News Literacy. “And, as we do that, we are also doing crucial news literacy work that contributes to the development of them as citizens and engaged news consumers. This kind of mobile project can help news publishers do both, and create great video content.”

The best content produced by project participants then gets showcased on South Africa’s national TV broadcaster, community television stations, mobile content sharing platforms, selected websites and social media sites. Plans are under way to add some local newspaper websites to this list. “There are no barriers to entry – you only need some cellphones and the willingness of your organization to get involved,” Blakeway said.

She explained that South Africa’s youth population today has never known apartheid, and that having a cellphone is the norm for young South Africans. However, the nation is deeply troubled, and here lies Blakeway’s motivation for the video journalism project. “We are faced with a lot of issues,” she explained, “poverty, crime, low education, HIV/AIDS, corruption. As a result in the post-Mandela era, a lot of young people are feeling voiceless and disempowered.”