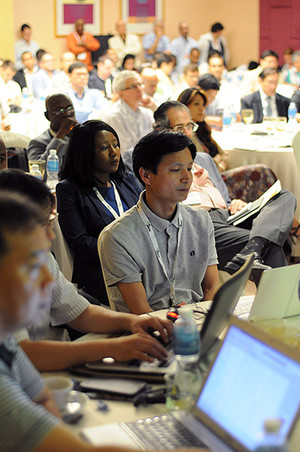 Press freedom in South East Asia (SEA) remains uneven. In a region with so many different political systems, there are inevitably many different laws governing the press – and as a result, significant challenges. Moderating the day’s proceedings, Media Advisor Kavi Chongkittavorn says that international press freedom indexes suggest there are at least 26 countries in SEA where there is “no clear idea of the press freedom situation.” SEA is “like Disneyland” in terms of the number of political systems and the different ways countries operate.

As a result, it is a challenging period for the media in SEA. New media in particular are facing old issues, and with a lack of definition as to how the digital space should be framed “they often suffer out-dated pressures designed for the traditional press,” says Gayathry Venkiteswaren, Executive Director of South East Press Alliance.

Gayathry Venkiteswaren“This is a diverse region – politically, culturally, socially, and especially in terms of the media,” says Venkiteswaren. “Each country has its particular issues based on these differences. When we breakdown how journalists actually practice the profession, it gets very complex.”

Legislation, and more often how it is interpreted, is one of the key issues. Media and broadcast laws, print and printing press laws are particularly problematic. The results of complex, ill-defined legislation that fails to protect press freedom means journalists are faced with accusations of cybercrimes, criminal defamation, lèse majesté, and a litany of variations according to local interpretations.

Ferrial HaffajeeThings may be a little more balanced in Africa. According to Ferrial Haffajee, Editor of City Press in South Africa, the continent’s journalists are “making full use of their freedoms.” However, major issues clearly remain. According to WAN-IFRA research, 14 journalists died in Somalia in 2012, and in Sudan – North and South – journalists are deliberately targeted. Ethiopia continues to jail journalists, often on charges related to terrorism. Eritrea remains a closed prison for many, including 2011 Golden Pen of Freedom laureate Dawit Isaak. Uganda’s government recently closed newspapers, while in the Democratic Republic of the Congo the press suffers from a minefield of tangled legislation. “Corruption remains a major issue, but the message should be that in Africa it is a balanced story between hope and remaining challenges,” said Haffajee.

Kavi Chongkittavorn (left) and Javier GarzaJavier Garza, Editorial Director at El Siglo de Torreón in Mexico, highlighted the issue of impunity, especially for local media. “Roughly nine out of ten cases are never prosecuted. State actors are by far the most frequent threat to freedom of expression, but an overwhelming 90% of violent attacks against the press originate from organised crime,” says Garza.

To counteract this situation, local media organisations are forced to examine newsroom safety protocols, often relying on international organisations in other parts of the country to keep their journalism going. However, Garza warns that the situation becomes easily exaggerated: “The violence is sporadic – it’s not as if every time we step outside the bullets start flying, but clearly, it is a far more frequent situation than we’d like.”

With similar challenges surfacing in parts of Central America such as in Honduras, as well as parts of Asia such as Pakistan, there are many lessons to share and experiences to learn from.

Aidan WhiteFor Aidan White, Director of the Ethical Journalism Network, part of the solution is for the media profession to take power back from governments who consistently fail to respect international standards. Rebuilding the ethical base of journalism is key. “It is about the basic tenets of being a journalist – how these are under attack and how we can improve ourselves from within to become a professional counterpoint against the issues in front of us, including defending press freedom,” says White.

His call is for the profession as a whole, from journalists up to publishers and media owners, to examine their own conduct and make a commitment to ethical practices, and which can become something for the industry to fall back on with confidence. “Ethical journalism is not free speech, it is constrained expression,” says White. “It works in a framework of values. With leadership from inside journalism to provide the highest possible standards, governments and UN bodies are more likely to succeed with measures to combat the threats to freedom of expression worldwide.”