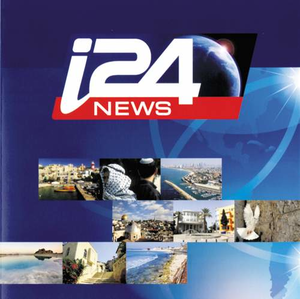 Lead by Frank Melloul, a former advisor to Dominique de Villepin and one-time director of international development and strategy at France 24, i24 has gathered 150 journalists in the ancient port of Jaffa to “decipher world news from the heart of the Middle East” in French, English and Arabic, with a view to introducing a new perspective on global events. According to a press release announcing the arrival of the news outlet back in April, this “new perspective” will reflect “that of Israeli society in all its forms.” Speaking to Le Figaro earlier this year, Melloul explained: “there is a place today for a new kind of journalism in the Middle East” before going on to discuss the necessity for an alternative perspective on the region than the one offered by Al Jazeera. With its stated aim of reflecting the diverse composition of Israeli society, Melloul claims that i24 will produce a brand of news that will debunk misconceptions about Israeli society, which he says is far more complex than most media representations of the country would have us believe.

The ethos of the news organisation is apparently conveyed in its name, with the ‘i’ of its moniker said to stand for “international, information, individual, interactive, independence.” This question of independence is of course a key concern for any media outlet, and Melloul has suggested that the fact of being privately financed will ensure i24’s editorial integrity. Unlike its closest competitors such as the BBC, Al Jazeera and France 24 (which also compiles television and online news in French, English and Arabic), i24 will receive no public funding. Instead it is supported by a group of investors, most notably Fanco-israeli businessman Patrick Drahi, a shareholder in the Internet service provider France Numéricable and head of the Israeli telecommunications network Hot. In an interview with French financial publication Les Echos, Melloul distanced the i24 brand from Al Jazeera’s model, rejecting the idea that he is creating an Israeli equivalent by insisting that “we are not here to create propaganda for the State of Israel.”

I24 will co-create its own content in partnership with Middle East News, 70 per cent of which will be concerned with international affairs while the remaining 30 will focus on local issues affecting Israel and the Middle Eastern region. The organisation will initially be working on a budget of €50 million a year – half the budget of France 24 and peanuts compared to Al Jazeera’s seemingly inexhaustible funds.

Although a great deal of media attention has been focused on the main news channel in the months leading up to the launch, i24’s website could prove key to the organisation’s early success. Described by Melloul as the first news channel born in the digital era, i24 is looking to take full advantage of the technological tools at its disposal by allowing consumers to live stream programmes via i24’s website and on smartphones and tablets. The revenue from these digital services may well be the initial means of monetising 124’s hoped for global audience, as while there are plans for the news channel to eventually be broadcast worldwide, primary focus will be on reaching viewers in Europe, Africa and the Middle East before rolling out the service in the U.S. and the rest of Asia. The site will most likely also be home to the same kind of articles and blogs as those found on Al Jazeera and France24, available in each of the site’s three main languages.

It remains to be seen whether i24, with its relatively limited starting budget, will be capable of producing the kind of high quality reporting that will entice viewers around the world to distinguish it from the plethora of news outlets that already perform a similar function with more resources at their disposal, but those involved with the project will no doubt be hoping that 1 July will herald the emergence of a new force in international news reporting.