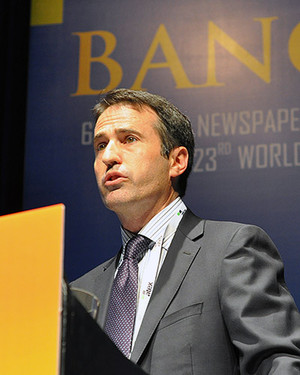 The Globe and Mail at first considered metering its core business content, but Stackhouse explained that, “the more we researched our audience, the more we discovered that they were willing to pay for generally great content.”

So Globe Unlimited was introduced in October 2012. It is essentially a metered model, but also has subscriber-only content and some entirely free content. The non-metered content is “service content,” Stackhouse explained, such as weather, or horoscopes. Core content – the majority – is metered, and niche content can be metered separately depending on advertising deals.

The premium content that is fully behind the wall is primarily politics and business, which are the paper’s core areas. It includes products such as ROB Insight, and Politics Insider. Coming next is a world news area which will put a chunk of international coverage behind the paywall. This subscriber-only content helps to ensure a sufficient number of “paywall encounters.”

“We meet regularly to discuss the success and challenges of the meter,” Stackhouse said, and the paywall team has created an editorial content grid to display what core readers value and what they are reading when. The newsroom has been organized to meet the programming demands of this.

The paper now has more than 90,000 subscribers, and saw a 90 percent conversion rate for those who signed up for a 99c one month trial.

Stackhouse described several lessons that The Globe and Mail has learnt so far: