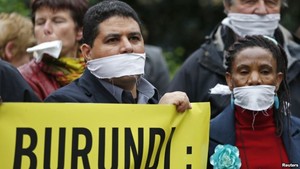 On 23 April, WAN-IFRA launched a protest campaign against the adoption of this press-restricting law. The Presidents of WAN-IFRA (Jacob Mathew*) and WEF (Erik Bjerager) wrote to Mr Nkurunziza expressing their concern over the threat to independent journalism that the new law presents, and urging him to “reaffirm [his] government’s commitment to press freedom and to take all necessary steps to ensure that Burundi fully respects its international obligations to freedom of expression.”

Despite protests from international organisations such as WAN-IFRA, the law was adopted by Burundi’s National Assembly on 3 April (see previous WAN-IFRA blog post), and then sent to the President for official approval on 6 May, marking the beginning of a 30 day period in which the President was tasked with either approving it or sending it back to Parliament.

Eric Manirakiza, director of a local private radio station, Radio Publique Africaine (RPA) told Agence France Presse that it was a “black day for press freedom.” “But we will continue to fight, we refuse to accept this serious regression in Burundi’s democracy,” he assured AFP (quotations translated from French).

The text of the new law states that the identity of journalists’ sources will no longer be protected if they reveal anything concerning state security, public order, national defense, or the local currency, and also gives Burundi’s National Communications Council (CNC) the power to award or take away press cards. Those who break the law face fines of between $2,000 and $6,000, a sum well above the annual salaries of many journalists, Reuters reported.

The CNC already constitute a threat to press freedom in Burundi, recently imposing a one-month ban on the popular newspaper Iwacu’s online forum, claiming that its readers were breaching the law by “endangering national unity, public order and security” since the site committed “incitement to ethnic hatred, justification of crimes, and insults to the head of state,” said campaign group Human Rights Watch.

Belge Minister of Foreign Affairs Didier Reynders denounced the law, pointing out that it violates Burundi’s signing of the International Covenant on Civil and Political Rights, a treaty adopted by the UN General Assembly in 1966. In their letter to President Nkurunziza, WAN-IFRA also highlighted the fact that “Burundi is a signatory to the African Charter on Human and People’s Rights, which gives its citizens the right to seek, receive, and impart information and ideas as enshrined in the Universal Declaration of Human Rights,” a right which the new media law seriously infringes upon.

Ex General-Secretary of the CNDD-FDD, Gélaise Ndabirabe, now a senator, explained that the law is intended to help professionalise the media and to prevent journalists from inciting hatred in a nation where 300,000 people died in ethnic conflict between 1994 and 2005. Ndabirabe claimed that the law was designed to restrain the fervour of journalists who have, since the violent general elections of 2012, “exchanged their job as journalists for that of politicians.”

According to the Burundi Union of Journalists (UBJ), a petition calling on the President not to approve the law received 15,000 signatures. Reuters have reported that Burundian journalists are intending put up a fight, planning to ignore the legislation and challenge it in the constitutional court.

*Jacob Matthew’s term of office as WAN-IFRA President ended on June 2. The new President of WAN-IFRA is Thomas Brunegard.