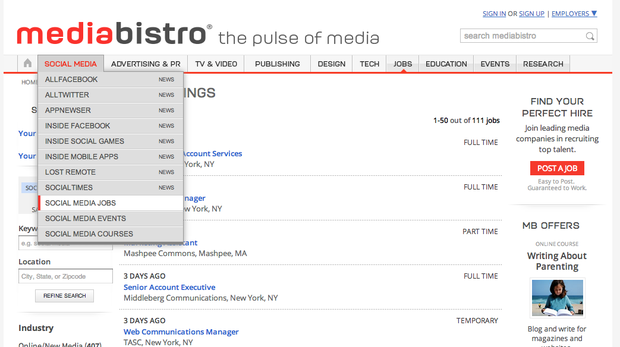 These roles may have even increased in importance, paralleling the rise of social media: Twitter and Facebook now serve as “secondary front pages” for the Huffington Post, according to Senior Social Media Editor Kerstin Shamberg.

“I can’t really imagine a world in which the front page of the Huffington Post wouldn’t have a human being deciding what’s OK to go on it, given what’s going on in the world at any given point in time,” she said during a HuffPost Live panel.

Though Shamberg said she doesn’t consider herself a journalist, many of her daily tasks resemble that of an editor. Choosing and timing tweets requires news judgment, added Wall Street Journal’s former Social Media Editor Liz Heron, and those tasks are more akin to journalism than marketing.

Instead of folding the position, many newsrooms have expanded it. News organizations now have dedicated social media teams rather than just one editor. Moreover, in a move that exemplifies the shift in the position, Heron was recently promoted to editor of emerging media, which encompases mobile as well as social.

The redefined role may be slightly less glamorous than it was in its early days, when social media editors often served as the online faces of their organizations.  A social media editor used to be the title for “the Newsroom Social Media Rockstar Ninja Guru,” the one-person PR machine behind each newsroom’s official Twitter feed and Facebook presence. But as journalists have become more familiar with a social media editor’s toolbelt of websites (59 percent of reporters now have Twitter accounts, the Oriella Digital Journalism Study found), responsibilities have been spread among larger social media teams, paidContent’s Mathew Ingram said in the HuffPost Live panel.

“Social media can’t belong to one person. It needs to be part of everyone’s job,” said Jennifer Preston, who served as The New York Times’ social media editor until the position was eliminated in December 2010. “It has to be integrated into the existing editorial process and production process. I’m convinced that’s the only way we’re going to crack the engagement nut.”

News organizations realize the value of their reporters’ unique brands, often preferable to one-size-fits-all official Twitter feeds that spout all the headlines, said Sherman Smith, online news editor, The Topeka Capital-Journal. Today’s social media editor serves as the conductor of the larger social strategy, which balances a news organization’s brand with those of its reporters.

Though social media editors spend less time trying to convince reporters to join social sites, many reporters still don’t understand the best tools for curating user-generated content through Twitter, Facebook, YouTube and other websites, Reuters’ former Social Media Editor Anthony De Rosa said during the HuffPost Live panel. Social media editors can not only track down this content and verify its authenticity, but they train staffers to do the same. They’re also responsible for investigating new Internet tools such as Vine and Instagram and devising their best uses for their news organizations. In this way, social media editors absorb the best of the web and offer it up to reporters for use, De Rosa said.

However, social media editor jobs remain among the top offerings on mediabistro.com, Fishman said. Of course, the idea is that a truly qualified social media editor will eventually work himself out of a job, Amber Naslund wrote, and five years from now the role could vanish, Heron said. But for now, there’s no need to start crafting obituaries.

Photo: As Fishman’s article points out, social media job offerings are among the top listings on mediabistro.com.