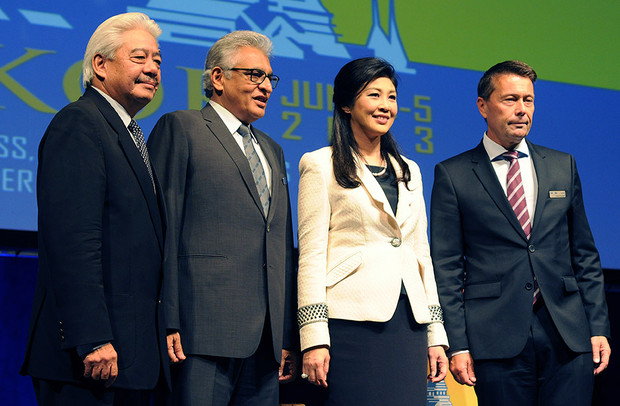 “I believe the news and publishing industries stand at an exciting time,” she said. “There is growing recognition of your vital role in promoting democracies, economic and social development as well as understanding between the peoples of all nations. You have at your disposal new technologies that allow you to function more effectively and to reach a wider audience. I wish you all every success during these times of change.”

It is the first time that the annual event has taken place in Bangkok and Southeast Asia.

“I would like to thank the board of WAN-IFRA for choosing Thailand as the host of this year’s meeting,” she said.

The Prime Minister spoke about her stated goal of “connecting people” in Thailand, which brings its own set of opportunities and challenges, she said. “Thailand’s diverse culture can mean strength but it also can lead to conflict and confrontation,” she said.

Education will be key to enhance common grounds and cultural cooperation, she said. “And this is what I believe you all in this room have a key role to play. The role of the press and the media has never been more important. A free and responsible press helps keep the public informed and the well-informed citizen is at the heart of understanding each other’s views.”

She said that is critical that a balance be struck between press freedom and the media’s responsibility. “For me, I believe that the press and media should find for themselves where this balance should be.”

Her statements came on the heels of Monday, when WAN-IFRA outgoing president Jacob Mathew encouraged the government to reconsider Article 112 of the Criminal Code, the “lèse-majesté” law intended to prevent offences against the king and the royal family and has been used to jail journalists.

Because anyone – private or government – can file a lèse-majesté case against anyone else, “the misuse of the law has created a climate of fear,” Mathew said, adding that improving Thailand’s press freedom situation would “encourage other South East Asian countries like Laos, Cambodia, Vietnam and Malaysia to move faster toward greater press freedom.”