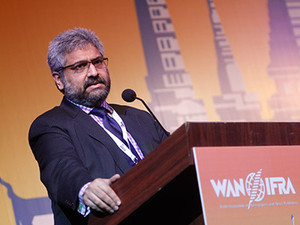 In India, newspapers derive an unusually large portion of their revenue from advertising, Varadarajan said: the share can be as high as 90%. Cover prices are very low: most are priced well below the cost of production, he specified, at maybe 5-10% of the price of material cost.

The subsequent dependence on advertising creates all kinds of vulnerabilities, he believes. “Some proprietors who look at the role that advertisements play come to the conclusion that they are in the advertising rather than the news business,” he said.

But it is crucial to remember that while readers can and do find much that is useful in advertising, the fact is that they buy a newspaper because they want credible and objective news, Varadarajan said. Readers trust news more than advertising, and you don’t want to break that trust.

Sponsored content, in the form of print advertorials, has been around for many years. Some are benign, Varajaradan said, but some are hideous, and some are malevolent in their impact. A good advertorial will provide information that readers might well find useful, but too often, the intention is to fool the reader, he believes. Many have the wo

The Internet can easily spread this content more widely, he added, giving an example of a print advertorial in The Hindu that the advertiser then clipped and displayed on its Facebook page as if it were an endorsement from the paper itself.

Sponsored content has really become a slippery slope towards another evil: paid news, said Varadarajan. Some of the largest media houses in India have been caught up in this, he added, mentioning one scandal where political candidates were paying for coverage

“We have take a clear stand against paid news of any form,” he said, adding that professional bodies and associations must do this. Another important point is that “all stakeholders in the paper need to understand that any material that originates from an advertiser is promotional material and not journalism,” he added. If sponsored content is used, then disclaimers need to be more prominently displayed, he suggested.

“The bottom line is that it’s essential for the future of news that the readers’ interests are protected,” Varadarajan concluded. “People are willing to spend money for news – for objective information – but if this is seen as compromised it will be the kiss of death for news business,” he believes.