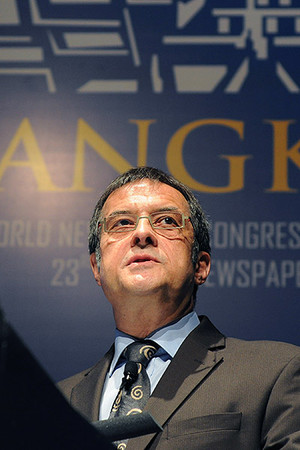 Interestingly, the session did not focus only on “print power” but also on the link between print and digital.

Take the Allgäuer Zeitung, a regional publisher in Germany, which started a local portal in 2009 completely produced with user-generated content. The portal, called “Griaß di” (Hello!), quickly drew 200 contributors from 140 communities and 800 villages in the region, 3300 registered users and about 2000 photos per month.

The portal was so successful that a free monthly magazine of the same name was launched in 2012. A true “web to print” product that uses content from the portal, as well as press releases. The Griaß di brand has since expanded to include events and other branded products for sale (retail products like hats, shirts, cups, etc.).

On the pure print side, there are a number of examples of publishers reinventing their products, launching new ones.

In Brazil, Werfel said “Correio de Bahia” relaunched its paper in 2009 with a completely new design, new format (tabloid), and even a shorter name: just “Correio”. The design was so radical that the front page masthead could change positions on the page from edition to edition. The paper features four simple sections: “24 hours” with breaking news, “More” for deeper content, “Life” and “Sports”.

Correio uses a number of interesting advertising formats and specials, such as wrapping the paper in a promotional envelope, belts wrapped around the paper for readers, and more.

Since its launch with 15,390 copies, circulation has increased 298 percent to 62,000 copies, and it is attracting that elusive younger audience.

Then there are technologies like Augmented Reality and NFC (near field communication) that offer promise for publishers to link print, mobile and digital.

PrintPower Europe, which its name gives away, advocates the benefits of print, particularly that of advertising in print.

In a 2012 survey by the Finnish research association VTT, 63 percent of consumers said they trust newspapers and magazines.

“But there is a big difference between how people think and what they do,” said Jelluma when it comes to preference vs. attractiveness.

For example, he said in the UK, the average citizen owns 11.4 media devices meaning they are very engaged with technology, so how do you get their attention in print?

That’s where more and more publishers are experimenting with technologies like Augmented Reality and NFC to not only provide a link between media but also to create new and innovative forms of advertising.