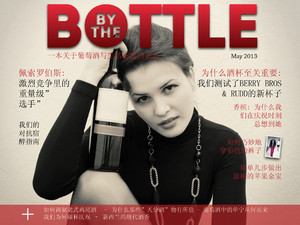 Publishers of the UK-based free iPad and iPhone magazine were surprised to find China among their top markets after its first publication. So the second issue, published in May, features English text in portrait mode and Mandarin text in landscape mode, TheMediaBriefing’s Jasper Jackson reported.

“Our first edition had more than 3,000 downloads, with the vast majority stemming from the UK, the US and China,” By the Bottle editor Georgie Clarke said in a release. “We weren’t expecting such a huge interest from the Asian market, but as we now know that it’s there, we have decided to create a magazine that can be read both languages.”

The group uses the iPad publishing platform Mag+, which charges per issue. So rather than publish two, language-specific editions, the young publication found it more financially sensible to put out one, combined publication. However, the dual-language feature added translation and design costs, according to TheMediaBriefing.

While this approach may be attractive to other publishers looking to expand into foreign markets, Clarke said By the Bottle’s success was due in part to the publication’s diminutive size. The same feat at a larger publication would likely prove more difficult.

“We’re small, we‘re efficient and our costs are low. If we want to make a decision we say, ‘Right, let’s do it,’” she said in an interview with TheMediaBriefing. “We don’t have to turn around for permission, or ask someone in IT. That makes us able to try anything.”

Several newspapers have already made this move: The New York Times launched a Chinese edition in 2012, and The Guardian made a foray into translated work with a series of articles in Russian, Estonian and Chinese in April 2012. The previous year, the newspaper also translated 72 articles on the Arab spring into Arabic.

But publications looking to launch translated editions should realize that the process isn’t as easy as entering text into translator apps, according to Ian Harris, CEO and founder of Search Laboratory. It’s preferable to hire a native translator, who will understand cultural nuances and vocabulary, to maximize translated articles’ reach. Translation services cost about US $120 for 1,000 words, according to data from ProZ.com, “the world’s largest community of translators.”

To save money, University of Warwick researchers recommend hiring multilingual journalists, since the future of online news won’t be restricted to English, according to Journalism.co.uk.

In addition, before jumping into foreign-language markets, it is essential to ensure a publication’s readiness as far as resources to handle foreign inquiries and currency are concerned, Harris said.

iPhone and iPad users can download the May issue of By the Bottle for free by clicking here or searching the app store in the food and drink category.

Photo: Chinese cover of By the Bottle‘s new issue.