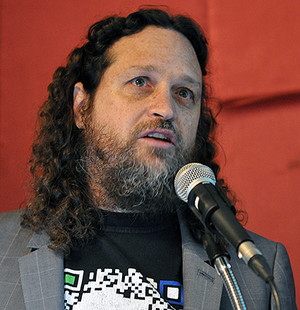 In terms of the Internet, we are living in the “age of context,” Arenstein said. The Internet is deep enough and intelligent enough that it can create connections between entities, people, events and processes.

He encouraged the audience to think about turning news into something that is actionable, something that the audience can directly use. He cited Google Now as technology that is doing just this, highlighting that crucially, it disaggregates content and serves the user the information that they need at that moment.

This is part of Google’s preparation for an “immersive future,” Arenstein believes, in which wearable computing will start to lay over the actionable and contextual information over your real life. In the not too distant future, wearable computing will mean that landscapes should start to speak to the wearers, giving them a wealth of information about their surroundings.

For new organisations to be part of this, their articles must be appropriately geo-tagged: this was Arenstein’s first recommendation for workflow change. His second, building off this, was to focus on entity extraction and network analysis, which can identify connections and context, and make hidden information into stories.

Other examples of projects, which cost less than $500 and can be implemented in small newsrooms:

Arenstein recommended hiring contractors rather than fulltime developers, as the landscape evolves so quickly and needs may vary per project. We need to get beyond playing catch-up, he stressed, all platforms are going to evolve fast.

He did insist on the importance of two kinds of staffers in every newsroom:

“None of these tools replace traditional journalism. They all hopefully help to augment the quality of journalism,” said Arenstein.

“These are tools that people start to use beyond news. They also make people come back to these sites, and this eventually helps to generate revenues,” he added. “People want to read context, but they also want usable news and usable tools.”

By Emma Goodman and Jean-Yves Chainon

For an indepth interview with Justin Arenstein, see our latest Trends in Newsrooms report. The Editors Masterclass was held with the support of the Bill & Melinda Gates Foundation.