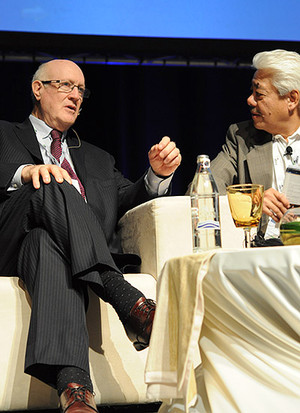 Crocker took part in an onstage conversation with Pichai Chuensuksawadi, Editor in Chief, Post Publishing, Thailand, on Wednesday afternoon during the final and joint session of the World Newspaper Congress, World Editors Forum and World Advertising Forum in Bangkok.

Crocker is now CEO and Co-Founder of Shinkuro, Inc., a start-up company focused on dynamic sharing of information across the Internet and on the deployment of improved security protocols on the Internet. He is also Board Chair of the Internet Corporation for Assigned Names and Numbers (ICANN).

Asked by Chuensuksawadi if he ever envisaged what the Internet has become, Crocker initially joked that “the answer is everything is proceeding exactly on schedule,” before describing the experiences of the development team he was on in the late 1960s and early 1970s.

However, a lot of things that have come to pass were already apparent back then, Crocker said. “There were advanced graphics, database machines and so forth. We could see, touch and feel the future. The mouse and hypertext had been invented. They existed, but only in one place. … We could see things like computers getting smaller and smaller.”

As for any inkling about some of the ways the Internet has developed, especially the explosion of social media, Crocker said “Everyone who was involved will have a different story, but my own story is: I didn’t see Google; I didn’t see Facebook; I didn’t see the personal side developing as much,” he said.

“I think the story of the Internet is two-fold: one part is the technology and the other is the impact,” he said.

“On the technical track,” Crocker said, “I think two things are going to happen somewhat subtlely, but they will seem large when we look back: One is, we have seen the rise of speech understanding – there will come a time when people can interact with some devices as easily as you and I are interacting, and keyboards will largely disappear.

“The second thing is I think the Internet will somewhat disappear. It will just be there. We don’t talk about the electric grid for example. It’s just part of the daily life almost everywhere. Quite a lot of the Internet will recede into the background.

On the topic of Internet security, Crocker said he thinks it is “too vague of a term, and covers way too many things. … I would ask what aspects of security are we talking about and then have very specific conversations about those.”

Addressing the issue of privacy after a question from an audience member, Crocker said while he once had strong feelings about the issue, he’s now inclined to see it in terms of human development. “If you go back to villages and small towns – you never had any privacy there. It was only when people moved into cities that they got any anonymity,” he said, adding that he thinks in future, people will gradually change their feelings and attitudes on the issue.