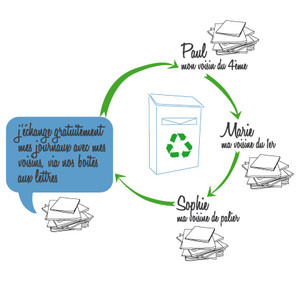 Julien Fuentes, founder of the new French website that facilitates the swapping of papers and magazines between neighbours or people living in a postal area (the noun ‘troc’ in French meaning a ‘swap’), is firm in his belief that print media have a bright future ahead. While digital media readership is growing day by day, there are still 4 billion print copies sold annually, according to Le Monde. “Around 35 million French people read a newspaper or magazine every day… which too often end up in the bin,” says Fuentes who, along with his wife, claims to consume around 20 magazines and journals per month (quotations translated from French).

The website allows a user to create an account free of charge, to register his/her address, the names of the publications he purchases and the frequency of his purchases. Once a registered user, you can spread the word amongst your neighbours by printing an ‘Ambassador Kit’ and putting up its posters in the hallway of your apartment building. If your neighbours then sign up, they will be able to locate your profile and the newspaper and magazine swapping can begin – through letter boxes or, preferably, through face-to-face exchange.

“The idea is to promote social links,” explains Fuentes. That’s all very well, but surely the practice of sharing magazines and newspapers is potentially damaging for print circulation figures?

Fuentes believes otherwise, arguing that in the long term it will be highly beneficial for print media, since it will help people discover new publications.

But surely this communal recycling of print publications will trigger a reduction in newspaper and magazine sales – why subscribe to a publication when you can take advantage of your neighbour’s?

Fuentes does not plan to make users pay for his ‘troc de presse’ service in the future. His model functions exclusively on advertising revenue and partnership deals with certain press groups, Le Monde reported.

Sceptics will inevitably argue that this “collaborative consumption” project – the notion of “transforming your letter box into a collaborative kiosk” – looks great on paper but is largely idealistic and will not function in practice. However, several dozen users have already created accounts, according to Le Monde. The challenge now lies in promoting the initiative far and wide in order to obtain the large-scale pool of users that is vital for an exchange service of this kind to function effectively.