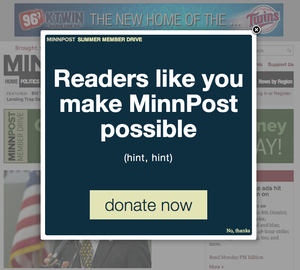 With the recession-prompted exodus from traditional newsrooms, many of these elite folk have taken their talent to nonprofit news organizations. But their journalistic lenses often focus only on content, leaving business plans a murky shape in the background. And they wonder why their startups are tanking.

So if it isn’t already clear, here’s why: About one-third of the 172 nonprofit news organizations Pew surveyed devoted less than 10 percent of total staff hours to business development. More than half devoted between 10 and 24 percent of time to business.

“Publishers who are journalists — and that’s most of them — are so heavily invested in the content that they do not devote significant time or money to revenue,” writes Michele McLellan, senior programming consultant at the Knight Digital Media Center. “Even those who are willing do not have the skills or even the understanding that they are running a business, even if they are a nonprofit.”

About 57 percent of the surveyed startups began with “a major seed grant,” and together this amounted to about $26 million in the past few years alone, Mark Jurkowitz, associate director of the project, told Newsosaur blogger Alan Mutter. But only 28 percent of companies saw this funding renewed “to any degree,” and, among the others, only 28 percent made up the entire difference through other resources, Mutter reported.

And though these companies attempt to diversify their funding, at least half of those that claim reliance on three or more revenue streams receive 75 percent of their backing from one type of source (usually foundation grants).

Once this money dries up, so do these organizations with no long-term business plans. Though most said they gained more money than they spent in 2011, about 21 percent received less than $50,000 revenue in 2011, and about a quarter earned between $50,001 and $250,000. Yet somehow most remain unreasonably optimistic, with 81 percent identifying as “very confident” or “somewhat confident” in their financial stability in the next five years. As Pew points out, four times as many startups (40 percent) said they’d hire staff next year as the number who predicted layoffs (10 percent).

But what are these organizations doing to ensure their rosy crystal ball predictions become reality? For many, very little.

McLellan referenced one unnamed news startup, whose grant proposal she reviewed, that listed advertising and sponsorships as its primary revenue sources. But its budget accounted $0 for either activity.

More than half of the surveyed startups said they need additional fundraising/marketing staffing, and 62 percent said they struggle to find time to devote to business needs. But many of these journalist-run groups lack the market-minded initiative to make these necessary changes: Resources must be redistributed. And with about half of the startups producing fewer than 10 original pieces in a two-week survey period, of course editorial processes will suffer, but this movement is essential for long-term sustainability.

Many nonprofits take pride in reiterating that the majority of donations directly feed the public-interest work for which they were founded. But McLellan said this needs to change: Foundations should require that their money goes in part to sustaining business. As McLellan advocated, companies should require review of an organization’s financial plan before agreeing to provide any funding.

A business eye is critical for success. By no coincidence, MinnPost, among the leaders of startups in diversifying and multiplying revenue, was founded by former Minneapolis Star Tribune publisher Joel Kramer, McLellan pointed out.

Another nonprofit journalism organization providing an example for its peers is ProPublica, which celebrated its fifth birthday yesterday. Despite the double-Pulitzer-winning nonprofit’s current success, early investors were gambling on their donations in 2008, editor Stephen Engelberg said.

“They did something that was courageous, visionary, and we’re very grateful for it,” Engleberg said in an interview with Nieman Lab.

Since its early days, a major focus for ProPublica has been diversifying funding sources to ensure long-term sustainability. The Sandler Foundation was the group’s financial bedrock years ago, but last year it only comprised 39 percent of total funding, ProPublica president Richard Tofel told Nieman Lab. This year, he hopes that number shifts down to a third: “That’s a very, very big difference,” he said.

Obviously editorial is important. But, if enough resources aren’t devoted to business development, it ceases to matter upon an organization’s inevitable demise.