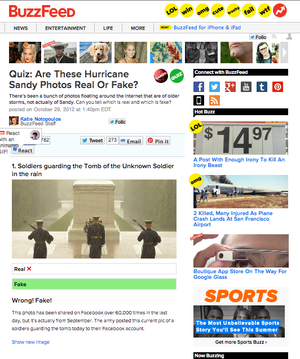 Research by the Indraprastha Institute of Information Technology in Delhi, India and IBM Research Labs analyzed 10,350 fake image Tweets from Hurricane Sandy. Such photos, as the Atlantic’s Alex Madrigal pointed out, generally come in three varieties: photoshopped pictures, falsely-marked old photos resurfaced from previous events and anachronistic, photoshopped images. As photos of Hurricane Sandy flooded the web at a rate of 10 Instagram photos per second, journalists such as Madrigal took on the roles of a “pictoral investigation bureau” to separate legitimate UGC from the deluge of fake images. BuzzFeed, the Guardian and Tom Phillips’ “Is Twitter Wrong?” Tumblr, among others, also monitored fake Sandy images.

Such UGC verification is particularly important during disasters, as the climate of a crisis situation minimizes the importance of a source’s Twitter reputation, so fake accounts’ content can go viral. During an event like Hurricane Sandy, people increasingly rely on Twitter’s search function rather than just their timelines, according to Poynter. This allows fake or doctored photos to echo far beyond the source’s follower base. And just one retweet from a credible source can allow a fake photo to spread rapidly. The study found that 86 percent of all the tweets with fake photos were retweets.

A decision tree classifier algorithm, which examined user features, such as the source’s number of followers and biographical information, and tweet content, such as length, type of punctuation and presence and type of emoticons, allowed the researchers to identify fake photos. The hope is that this science will eventually be rolled out for everyday use. The researchers mention developing a browser add-on that could automatically detect fake Twitter images, Poynter reported.

The AP uses similar software by Hany Farid, a researcher at Dartmouth College, said Santiago Lyon, vice president and director of photographer at AP. Lyon acknowledged, however, that such software is imperfect and “cannot yet detect every skillful manipulation.”

As this technology is still being tested and perfected, journalists must rely on other means to confirm UGC. But “journalistic hunches” can be fallible, as BuzzFeed’s quiz of real or fake Sandy photos shows. Despite the sense of 24-hour news cycle’s urgency, it’s essential to make sure all user-generated content is authenticated before publishing it.

“Even if something is incredibly compelling and it doesn’t pass one of our steps, then it doesn’t go out,” Fergus Bell, AP’s Social Media & UGC Editor, International, told Poynter. “That’s how we stop from being wrong, which is tough sometimes, especially when it’s something that’s really great. But we just don’t put it out, because the [verification] system has grown organically and it hasn’t failed us yet, and so we trust it.”

It’s important to establish a defined step-by-step process for validating UGC, as doing so will ensure both speed and accuracy, Poynter reported. What follows is a list of best practices and tips for verifying and using UGC, based on policies of media organisations including the BBC, AP and Storyful.