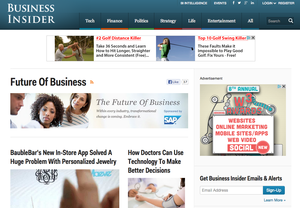 “It’s not really the future of business if ‘The Future of Business’ has to ignore 10 percent of the companies out there,” said George Freeman, an attorney with Jenner & Block and former longtime counsel at The New York Times. “They’re subscribing to bias rules that are set down by their sponsor advertisers.”

Other news organizations have tried to make clear that advertisers have no editorial control over sponsored content. For instance, MillerCoors has no prior review of ESPN The Magazine’s “Cold Hard Facts presented by Coors Light,” and, as Ad Age noted, Deloitte has no sway over staff-written stories in the three Wall Street Journal sections it sponsors.

The blog was announced in November, and SAP hasn’t acted on its veto power yet. But BI President Julie Hansen suggested story topics are tailored so SAP won’t have to.

“I can’t imagine why we would force someone to sponsor a piece of content that they disagree with or are opposed to,” she told Ad Age. “We can cover their competitors all night and day on the site and we do, but why would anyone in their right minds sponsor a story about their competitors?”

Hansen said the section doesn’t aim to be “the definitive all-inclusive Bible on the future of business,” so the blog’s pointed omissions aren’t dire. But “The Future of Business” seems ripe for conflicts of interests. Other sponsored sections are tangentially rather than directly related to the sponsors’ interests, such as “Cold Hard Facts,” which is about sports. But with a tech company sponsoring a business section, news is more likely to be skewed.

“The Future of Business” ventures into a dangerous sphere, somewhere between advertorials and sponsored content. What’s worrisome about this zone is that readers aren’t familiar with it and may thus misvalue the content. It combines the credibility of staff work, which used to be out of reach for advertorials, with brand influence, which was formerly off-limits for sponsored content. But the pieces don’t note this distinction. Indeed, a statement at the top reads only: