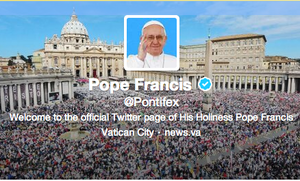 Co-ordinated by the Vatican’s tech-savvy ‘iPriest’ Father Paolo Padrini, pope2you-Corriere is expected to launch in the next few days. The digital service will allow Corriere’s online readers to access and share original content and images related to the annual rally. A separate pope2you site already exists and enables Catholics to send photos to Pope Francis as a way of “spiritually participating” in WYD 2013, but the decision to launch a ‘spin-off’ edition with a prominent news site suggests that the pope doesn’t just want to preach to the converted.

Pope Francis is already proving popular in Italy, due in no small part to the way in which the head of the Roman Catholic Church has presented himself through the media. A Demopolis poll published in June this year, only three months after Francesco’s election to the pontificate, revealed that 85% of Italians as a whole had confidence in the new pontiff. The survey also showed that amongst Catholics confidence in the pope went up to 96%, and rose to 66% amongst non-Catholics and atheists. These impressive popularity rates were attributed above all to the simplicity and spontaneity of the pope’s speech and messages, which have made him seem “closer to the people”, reported Corriere della Sera. The Vatican launched a general Twitter account in 2010 with the intention of improving the organisation’s internal communication systems and with providing updates and news to its followers, and then introduced an account dedicated solely to the pope (@pontifex) as a means of reaching out to a younger audience.

Plans for engagement via new media appear to have stepped up a level with the arrival of the new pope. As well as the two Pope2you sites, the Vatican will also be using a range of social media platforms to engage with young Catholics around the world during World Youth Day. A Facebook page and Pinterest board have already been launched in anticipation of WYD, but even more interesting is the use that will be made of Twitter during the last week of July. In order that those who cannot afford to make the pilgrimage to Copacabana beach might benefit from the “total remission of sins and relief from the obligation of penitence” promised to all attendees, absent believers will be able to receive the indulgence through Twitter. Director of the Vatican’s social communications Archbishop CElli has insisted that the decision does not mean that it is possible to “obtain indulgences like getting a coffee from a vending machine”. Rather, only true believers following events in Rio live will receive benediction.