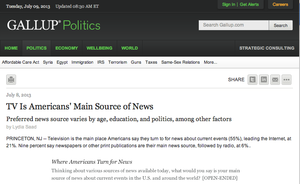 Gallup’s open-ended telephone poll of 2,048 adults, conducted in late June, found that the number who declared the Internet as their main source of news rose only 6 percent (to 27 percent) for the 18-29 age group. The study noted that Internet use is “ascending, but it remains to be seen if it will replace television as much as it will newspapers.” However, these numbers are at at odds with the Reuters Institute for the Study of Journalism’s Digital News Report. That report, released in June, found that 50 percent of those between ages 18 and 44 listed the Internet as their main source of news. For Americans aged 18-24, that figure rises to 64 percent.

The charts below illustrate this discrepancy. While Gallup’s and Reuters’ youngest age groups are different (Gallup’s is 18-29 and Reuters’ is 18-24), the disparity is extended to all age groups.

Pew Research Center data further contradicts Gallup‘s findings: Only 28 percent of 18- to 29-year-olds surveyed by Pew said they regularly watch TV news, down from 42 percent in 2006. The percentage of overall Americans who regularly watch TV news has also dropped from 54 percent in 2006 to 48 percent. Local TV audiences were down across every key time slot in 2012, with an average of 6.5 percent decline for local affiliates of the four major networks, according to Pew’s 2013 report. Meanwhile, digital audiences increased 7.2 percent, suggesting TV viewers are cutting their cords in favor of web content.

Additionally, only 9 percent of those Gallup surveyed listed print media as their primary news source. Even among newspapers’ strongest market, seniors aged 65 and up, only 18 percent chose newspapers as their main news source. That figure dropped to 7 and 8 percent for those younger than 65, leading the researchers to conclude that “the future of that medium [is] in serious doubt” as seniors age.

However, NetNewsCheck reported on the surprising strength of newspaper readership among millennials: 57 percent of those ages 18-34 read newspapers, in print or online, in an average week, suggesting that the medium is not as doomed as the Gallup figures suggest. Data from WAN-IFRA’s annual World Press Trends report found that more than half of the world’s adult population, 2.5 billion people, read a daily newspaper in print, and more than 600 million do so in digital form. Additionally, more than 17 percent of U.S. adults visit a newspaper site every day.

These discrepancies suggest that Gallup‘s poll is not necessarily the cut-and-dried “good news for TV, but bad news for print media” that the researchers imply.