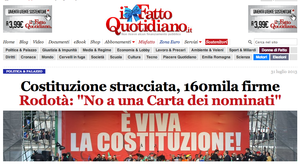 The figures are undoubtedly uplifting for a news outlet two months shy of celebrating its fourth anniversary. Peter Gomez, online editor of Il Fatto Quotidiano, which is also published in print, told the Editors Weblog back in 2011 that the website aimed “to become the third online newspaper in the Italian web news landscape.” And now it has done just that. This March, Il Fatto was also rated third in a survey of homepage visits to Italian news sites, and these latest traffic figures appear to cement the publication’s status as one of the country’s top news media players.

Yet just as encouraging for Il Fatto‘s founders will be the news that Italians consider the title’s website to be one of Italy’s most trustworthy source of information, with the highest quality of journalism.

The Human Highway poll was commissioned by Banzai, the Italian IT holding company, and included an analysis of the image of 12 online news titles. Il Fatto’s journalists were by far the most trusted in comparison to reporters from organisations throughout Italy’s online news landscape.

Asked to what extent they trusted the information received from Italy’s online media players, those polled placed Il Fatto second only to investigative site Linkiesta and Il Fatto was unquestionably rated as the most independent online news publication. Media analysis blog Il Giornalaio rightly points out that those who responded to the survey were individuals who had access to the Internet, which excluded a significant number of Italians from contributing (Italy having a low level of internet penetration) but the data produced nonetheless appears to go some way to supporting Il Fatto’s claim to be a champion of independent, objective news reporting in Italy.

Created by journalist Marco Travaglio, Il Fatto proudly states that it receives no public funding, unlike its rival Italian news publications. Indeed the paper’s brand identity is largely constructed around the idea that while other titles, including Corriere and Repubblica, receive state-financed subsidies that might prevent them from publishing particularly harsh criticisms of government policy, Il Fatto’s financial independence makes it unique and considerably freer in its editorial choices. Though it was suggested last year that a drop in circulation in 2012 would force the paper to turn cap in hand to the government, Il Fatto continues to be financed solely by advertising and circulation revenue.