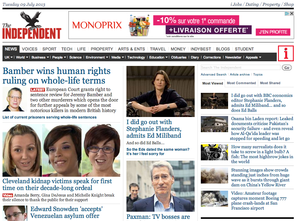 The cuts will be shared among the Independent, Independent on Sunday and i‘s 190-person editorial staff, Press Gazette reported. Those whose jobs are in danger are to be told this afternoon.

Layoffs were avoided earlier this year when 15 staff voluntered as redundant after the Independent and Independent on Sunday combined forces.

The Independent has managed to cut its losses in half over the last two years, but this year’s estimates are still in the red, around £11.8 million. Chris Blackhurst, group content director of the Independent newspapers, told Press Gazette the decision was “purely about saving money.”

However, Blackhurst added that nine new staffers will be hired soon as 20 new online positions are created. The Independent is set to relaunch as “a very different paper” in the fall with new editor Amol Rajan, Blackhurst said.