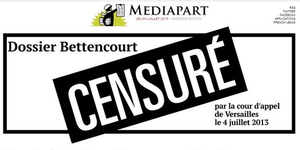 To recap: Pascal Bonnefoy, butler to Liliane Bettencourt (France’s richest woman and L’Oréal heiress) secretly recorded meetings that took place at his employer’s house in 2010. Bonnefoy claimed he did so in order to prove Mme Bettencourt’s financial advisers, particularly Patrice de Maistre, were taking advantage of the octogenarian’s increasingly frail state of mind. Mediapart was the first to publish the recordings, and Le Point was quick to follow. After an unsuccessful attempt three years ago to force the two media organisations to retract the recordings, Bettencourt and de Maistre were supported in their quest by the Cour d’appel de Versailles, which earlier this month ordered the removal of any mention of the tapes from mediapart.fr and lepoint.fr.

Since then Mediapart and an association of 40 media outlets and civil rights groups have launched an online petition in defence of the public’s “right to know”, which has so far garnered 47,211 signatures (as of 1.30 pm, Monday 22 July). In an email exchange with the Editors Weblog, François Bonnet, who founded Mediapart along with Plenel, Laurent Mauduit and  Gérard Desportes, discussed the ruling and what it means for the continued coverage of the Bettencourt Affair.

EW: How confident are you of winning an appeal to overturn the court’s decision?

FB: To clarify, the injunction [on publishing material relating to the “butler tapes”] was imposed on us, and on Le Point, by the Court of Appeal of Versailles. We are therefore taking the case to the Supreme Court [cour de cassation]. The ban is so ridiculous that we’re very confident of winning on appeal. Two court rulings have already found in our favour. We believe this injunction contravenes Article 10 of the European Convention on Human Rights, the basis for all rulings at the European Court [of Human Rights]. The Court of Appeal of Paris has already ruled in our favour only a few months ago, with a very detailed line of argument, whilst the cour d’appel de Versailles only took a very vague and limited set of considerations into account.

EW: How important are these recordings in the on-going criminal investigation into the Bettencourt affair?

FB: They are essential. Without these recordings, there is no Bettencourt affair. They were the catalyst for half a dozen criminal investigations, they have enabled the French state to recover more than 100 million euros of unpaid taxes, they’re the reason that a dozen people have been charged with criminal offences and it is because of them that de Maistre and the former minister Eric Woerth were taken to court for trading in influence.

EW: If the recordings are such vital pieces of evidence, how did the court justify the order to remove all mention of them?

FB: The court of Versailles ordered that they be removed, but at the same time the criminal chamber of the Supreme Court has allowed as it recognises their “value as evidence.” In a nutshell, you can see that the law isn’t an exact science, or to put it another way, it is administered by judges who have very different perspectives.

EW: Does this decision prevent Mediapart from continuing its investigation into the Bettencourt affair even without making use of the recordings? For example, would you be prevented from interviewing key figures from the case such as Pascal Bonnefoy?

FB: The ruling forbids any mention of the recordings, which means that an interview with Bonnefoy would be possible. However, the decision makes it almost impossible for us to follow the progress of the criminal investigations that are already underway as most of the details of the investigations can only be explained in reference to the recordings. Our colleagues at other press organisations can freely refer to them and quote from them as they have not been named by the courts and this absurd injunction only applies to Le Point and Mediapart.

EW: Do French privacy laws need to change or be adapted in some way or are they still put to good use in the majority of cases?

FB: In my opinion changing the laws would be useless. That said, as far as the rights of the press and freedom are concerned, French legislation needs to get in line with European texts and practices – particularly those of the European Court of Human Rights – as soon as possible. There is, however, another area of French law that needs to evolve: the fundamental right to the anonymity and protection of sources. On this issue, France is guilty of lagging behind the majority of European countries.