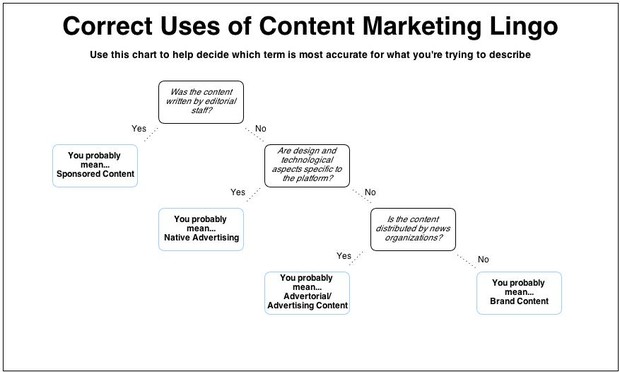 “Not to sound alarmist, but if there is not a consistent definition (that includes both the technical format along with the content that is embedded within in), the confusion will cause challenges in the growth of online advertising,” writes Mitch Joel of the Harvard Business Review.

“We need to all speak the same language around ‘native advertising,’” he added later. “The future of paid advertising depends on it.”

To clarify the differences between these buzzwords, we’ve compiled a list of definitions and the above flow chart to help decide in which instances to use which term. However, it is important to note that different publishers use the terms differently and that definitions are still evolving.

Though “native advertising” is often used as a synonym of “sponsored content,” an important difference lies in the word “native.” This type of advertisement is platform-specific both in content and technological aspects related to formatting, and thus it cannot be replicated on other platforms, Joel notes. Twitter’s Promoted Tweets and Facebook’s Suggested Posts are examples.

Sponsored content is often suggested to be marketer-written stories camouflaged among legitimate news, but this definition is closer to that of advertorials. Instead, sponsored content is written by news organizations’ editorial staff. Red flags for this type of advertising are phrases such as “presented by,” “brought to you by” and “sponsored by,” according to Advance Digital Search & Social Group.

ESPN: The Magazine’s “Cold Hard Facts presented by Coors Light,” is an example: The content is written by editorial staffers, and Coors Light has no prior review or control over the content. Instead, the company chose to associate its name with a broad topic about which the magazine writes.

Most of what is being deemed “sponsored content” and “native advertising” today are simply advanced advertorials, which have been around for centuries. The controversial Atlantic article on scientology is an example: It could be replicated by other news organizations, and it was not written by editorial staffers, so it is neither native advertising nor sponsored content. Forbes’ BrandVoice platform is another example.

BuzzFeed’s entire advertising revenue is dependent on this kind of content. Advertorials such as “10 Words You’ve Probably Been Misusing” on the site’s homepage mimic staff-written pieces such as “20 Amazing People Who Play By Their Own Rules” without being tailored to the platform technologically. Any news organization could use the same text.

Unlike advertorials, brand content is both created and distributed by marketers. Red Bull’s YouTube channel and magazine The Red Bulletin are examples. This content doesn’t attempt a hard sell but instead tries to provide entertainment value, such as The Red Bulletin’s articles on the world’s deepest free diver and human-pyramid building in Spain, as The Washington Post reported.

Content marketing encompasses all these other terms. Using this catch-all phrase is “a little like using the word ‘life form’ when you’re describing a squirrel,” Advance Digital Search & Social Group’s John Denny wrote. It refers to all types of entertainment content that are indirectly trying to sell a product, regardless of format (Denny noted it includes blog posts, magazine articles, photography, Facebook and Twitter posts and webinars, to name a few types).