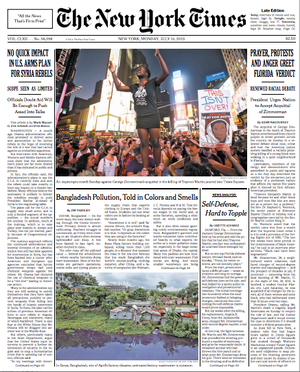 The as-yet unnamed digital publication will be distinct in character from the Times’ existing Sunday magazine, and will look to build on the success of Snow Fall, the award-winning project that saw video, interactive graphics and biography combine to tell the six-part story of skiers stuck in an avalanche.

A “new dining news product” is also in the works and these two digital ventures will both be lead by Sam Sifton, the former restaurant critic who is leaving his position as the paper’s national editor to take on the new role. In a more advanced stage of development than these two projects, both of which currently lack a name, is “Need to Know” (N2K), designed to offer “quick and periodic dips into the news.” While no specific details as to the release date or pricing of the ventures have been released, “Need to Know” is said to be advanced enough to need nothing so much as an editor – Cliff Levy – to “sculpt its content.”

These three digital experiments are the latest developments in what Abramson calls the “push” to create new ways of producing and presenting digital journalism at the NYT. Mobile traffic counts for almost 50 percent of visits to nytimes.com at a time when the NYT reported its weakest digital growth since the introduction of its paid digital subscription model. In the first quarter of 2013 the site registered 676,000 digital subscribers, only 5.6 percent higher than the preceding quarter according to Quartz. Although this figure is little cause for alarm, it does perhaps signal that the second most-read online newspaper in the world is right to adopt a new digital strategy. “Need to Know” will be the first of the NYT’s offering of lower-cost digital products. Further reduced-price subscriptions will eventually be introduced across publications covering niche topics such as travel, which are hoped to begin making a profit in 2014, according to a story on PaidContent by Jeff John Roberts.

The New York Times is one of several news organisations leaving the idea of “web-first” behind in favour of concentrating on mobile-friendly products: As previously reported by this blog, smartphone and tablet targeting are key facets of the newly devolved News Corp’s plans to become profitable. After a lengthy review of its online output, the New York Times said goodbye to a hefty portion of its online sections, including the Green Blog, Media Decoder and university blog The Choice. More are rumoured to follow. In an article discussing the NYT’s decision to cull some of its most popular blogs, Public Editor Margaret Sullivan revealed that the paper’s executives were keen to do away with some of its online content in order to “focus […] resources elsewhere.”

If there was ever any doubt, Abramson’s letter on Friday proves once and for all that this “elsewhere” is mobile.