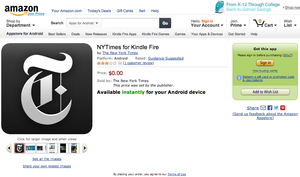 “The Kindle Fire has been hugely successful and is offered at a highly accessible price point, so we expect this to become a key platform in our portfolio,” said Graham Horner, marketing director of Telegraph Media Group.

As of August, the Kindle Fire made up 22 percent of the U.S. tablet market, paidContent reported. Amazon has not released its sales figures, but the market share suggests sales were much lower than early analysts predicted. In contrast, half of all tablet owners have iPads, according to Mashable.

While three-quarters of the Times’ digital traffic comes from an iPhone or iPad, The Next Web reported, the newspaper has seen a recent increase in Android readers. The new Kindle Fire app, released yesterday, will allow the newspaper to capitalise on this trend, Denise Warren, executive vice president of digital products and services, told Journalism.co.uk.

Both the Times and Telegraph offer current digital subscribers free access to their apps, and The Telegraph also has a £9.99 per month payment option for the app only. Additionally, The Times will facilitate subscription through Amazon accounts, Journalism.co.uk reported.

The Times will take down its recently-revamped metered digital paywall, which allows for viewing of three articles per day, for the new app until August (though videos will remain free). Similarly, The Telegraph will offer a 30-day free trial for non-subscribers. Telegraph is also offering a free Kindle Fire for new print subscribers, InPublishing reported.

Because many digital readers just scan headlines, and most non-subscribers don’t read more than three articles per day, The Times does not expect its paywall to majorly affect app use, Paul Smurl, general manager of core digital products, told The Next Web. “But we do think we’ll be able to put the pay-gate in front of people more often, and we’re hoping we can convert more subscribers as a result,” he said.

The Times’ new app will include features such as offline reading, cross-platform saving, sharing via social media and email and text-to-speech functionality, according to Journalism.co.uk. The Telegraph’s new app will also include a puzzle section with 30-days worth of crosswords and Sudoku puzzles.

News organisations have been slow to colonize the Kindle Fire. Back in 2010, Amazon more than doubled publishers’ cuts for subscriptions from an estimated 30 percent to 70 percent to encourage more publications to sell via the Kindle store.

The Kindle Fire app is The Times’ fifth e-edition, with apps previously created for iOS, Android, BlackBerry 10, Windows Phone and the Kindle e-reader, according to The Next Web. The Telegraph also previously had iPad, Windows 8 and Kindle applications, InPublishing reported. The success of the Kindle e-reader prompted The Telegraph’s Kindle Fire app launch, Journalism.co.uk reported.

Newsquest also started experimenting with Kindle Fire in November. The group rolled out replica newspaper apps for 10 titles to scope out the demand, according to Journalism.co.uk.

For news organisations that already have Android applications, creating a Kindle Fire app requires little modification. The Times began developing the new app in-house about three months ago, but the bulk of the work was not from design but integrating with Amazon’s payment system, according to The Next Web.

It remains to be seen whether additional publishers will follow the Times’ and Telegraphs’ lead in creating Kindle Fire apps of their own.