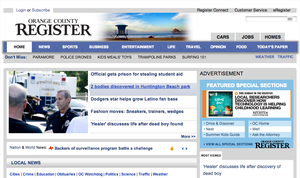 To the surprise of many, first-time newspaper owner Aaron Kushner, who along with investment partner Eric Spitz acquired the California newspaper in June of last year, has rapidly seen signs of success in a short period of time. Having doubled newsroom staff to 360 people, increased the paper’s print output with 786 extra pages of content and new sections, re-opened its Washington bureau and established fresh wire services for foreign news reporting, the OC Register sells 130,000 copies on weekdays. That figure leaps to 300,000 on Sundays. Though home delivery rates haven’t seen any change last year, overall circulation has soared.

It might be tempting to term the new approach at the OC Register “print-first,” due to the lengths the editorial team have gone to in order to produce local content: in one weekend alone 40 reporters can be sent to cover high-school sports events across the region, to cater for the print edition’s bulked up high-school sports section.

Most readers access the Register in its print form, so focus on this area could arguably only be positive in terms of advertising revenue. However, Register editor Ken Brusic prefers to think of the strategy as “subscriber-first.” Central to the new approach adopted by the Register is a focus on retaining core readers and on encouraging others to pay for the higher quality of journalism being produced by its reinforced reporting team. “That’s the model,” Kushner told The Guardian, “have a good product and get paid fairly for it.” Print and online subscribers pay $1 a day, after a metered paywall was introduced at ocregister.com earlier this year. The pay meter means that print subscription prices could be raised without existing subscribers feeling as though they were subsidising those readers who accessed the Register’s content for free.

This ambitious level of investment at the OC Register comes at the same time that other newspaper players are reducing print days, slimming down print products and as a result seeing a fall in circulation and print ad revenue. Just last month USAToday compared the fortunes of the Register with The Times-Picayune, the New-Orleans based paper. In stark contrast with the California title, The Times-Picayune reduced its print days and opted for a digital-first outlook. Loyal readers were outraged and the scene was set for rival titles such as The Advocate newspaper to further undermine the Picayune’s position.

According to The Guardian official revenue figures will only be released in September, and until then analysts are cautious about declaring the experiment a success. Assessing the “newsonomics” of Kushner’s approach, media analyst Ken Doctor wrote that “it’s possible the Register could take in about as much new money in circulation revenue as it is putting into its expanded news products…” but it will be two year’s time before a real appreciation of the situation will be possible. Nonetheless, the Register’s owners appear confident, if their latest decision to roll out the formerly twice-weekly title Irvine World Newsas a daily publication is anything to go by. Expansion plans could even lead Kushner and co. to buy the Los Angeles Times, should Tribune Company decide to sell the historic title.