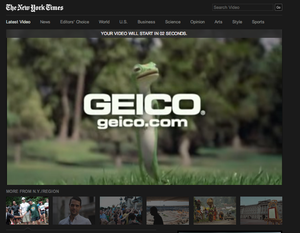 The study, from May 2012 to February 2013, found that 54 percent of display ads went unseen. This finding isn’t a mere reprise of the the issue of ads being ignored, though publishers have been experimenting to resolve that one. Rather, a majority of ads did not appear. ComScore marked any ad at least 50 percent on-screen for one second visible, The Wall Street Journal reported.

Many marketers in turn began pressuring publishers to add clauses ensuring viewability. ConAgra Foods, which found that 30 percent of their display ads were non-viewable, now asks publishers to run ads as many times as necessary to get their money’s worth of views, according to The Journal. Media-buying firm Spark now also necessitates a “viewability” guarantee.

“We can’t go back,” Shelby Saville, executive vice president of digital at Spark, told The Journal.

But the Media Ratings Council warned publishers against promising viewability, as proper technology to ensure ads are being seen isn’t ready, AdWeek reported. The Interactive Advertising Bureau is also developing a uniform viewability measurement system, according to The Journal. But until then, news organizations are in a tough position, unable to adequately respond to advertiser pressure with concrete figures or real guarantees. This leaves news outlets several options: redesign their ad units or websites or create more video advertising opportunities.

One of the reasons for low viewability rates is that often users scroll past the top of pages too fast to register the ads. The Washington Post responded to this dilemma by creating a “superview” ad unit that scrolls with readers for 7 seconds, increasing viewability in tests up to 19 percent, according to AdWeek. Similarly, some publishers have been redesigning their websites to increase the likelihood of viewability, as ads are often unseen due to issues such as browser size, according to The Journal.

Other causes of low viewability include technical issues and fraud, The Journal reported. In addition to eliminating the obstacles of quick scrolling and design specifications, video ads have been shown to have lower rates of fraud. As publishers can’t guarantee viewability for display ads, some may see an increase in demand for video placements.

With average CPMs above $8, compared to display ads’ $0.92-$1.06 average rate range, video ads are already an attractive prospect to publishers. Increasing their lustre, new research linked video ads on computers to higher levels of interaction than those on TV, 29 percent compared to 24 percent, according to Mediapost. Video ad impressions grew nearly 27 percent month-to-month to more than 20 billion in June, Clickz reported.

But as news organizations continue to refine their video content strategies, they’ve been struggling to meet advertiser demand. As newspaper advertising sales continue to sink (Gannett’s dropped 5 percent in the second quarter of 2013 alone), video ads could be the pot of gold publishers have been searching for. But first, they’ve got to start producing more video.

Photo: Video ads circumvent several of the causes of low ad viewability, such as fast scrolling.