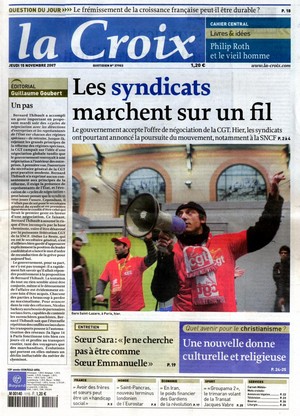 The general interest Roman-Catholic newspaper owned by the press group Bayard Presse was the only French national daily to have made sales progress, with a 1.9 percent increase in May alone with an average daily diffusion of 95,772 copies. Le Figaro have suggested that this increase may be due to La Croix’s recent coverage of key events in France such as the gay marriage debate and the aftermath of the new Pope’s appointment, both topics of prime interest to the paper’s loyal Catholic readership.

The success of La Croix contrasts starkly with the plummeting sales figures of other national titles in May, for example, Libération (-25.3 percent), Aujourd’hui en France (- 12.5 percent) and L’Équipe (-8.2 percent) (for a full list of sales figures, consult the OJD’s website). “There is evidently an unfavourable comparison to be made with May 2012, the month of the presidential elections, but this only half-explains this series of poor performances,” explained the director of the OJD, Patrick Bartement to Le Figaro. He listed other contributing factors as “the long May bank holiday weekend in honour of the Ascension, the weaknesses of distribution networks, and more generally, the decrease in buying-power of the French people.”

Left-wing daily Libération, whose kiosk sales are traditionally rather unstable, and who benefited considerably from their coverage of the general elections last May, was among those to have suffered the worst. Daily evening newspaper Le Monde’s sales dipped by 8 percent this May, their largest fall since January 2012 (-8.5 percent). Along with Libération, centrist daily Aujourd’hui en France owned by the Amaury group (also owners of L’Equipe) is another title to have displayed a consistent series of dipping sales figures since the beginning of this year.

Le Figaro, having recorded a 5.5 percent increase in paid circulation last year (notably due to the closure of major competitor France Soir following declared bankruptcy in July 2012), is also a victim of the press crisis according to May’s figures. However, down by 3.9 percent in May it is, along with Les Echos (-2.9 percent), the title that has most successfully resisted the general sales decline. It remains the best-selling national daily newspaper with a daily average of 316,670 copies sold in May.

Digital sales appear to be dominating certain French newspapers’ sales figures more and more. Le Monde, Les Échos and Libération are the three dailies for which digital distribution is the most important, with 10 percent of sales generated from their digital versions.