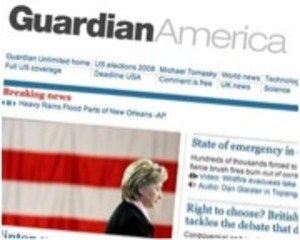 “This perpetual ambition to take on America is [a] concern. I just think it’s a slow-motion car-crash, that particular venture.” So said an anonymous “former Observer journalist”, quoted in July 2012 by GQ, when questioned about the Guardian Media Group‘s business strategies.

The former GMG employee was perhaps wise to remain anonymous, as rather than crashing, the Guardian‘s American expansion has accelerated. Over the course of the past twelve months the Guardian has boosted its audience in the U.S, to the extent that American readers now count for about a third of all of its 40 million yearly unique online visitors, according to figures collected by ComScore. The remaining two thirds are evenly split between British visitors and browsers throughout the rest of the world. Though The Atlantic has revealed that within the first seven days after publishing the NSA files unique visitors to the US site rose by 41% and mobile traffic increased by 66%, figures gathered between 2012 and the beginning of 2013 suggest that there is more to the site’s American success than its coverage of the NSA’s PRISM programme alone.

Traffic to guardiannews.com rose by 37% in 2012, despite the fact that the news site had never spent any money on breaking into the American market. ComScore data published last December identified the Guardian as the third most-read online newspaper in the world, with just over 38 million million unique users a month, behind the New York Times’ 48 million and the Mail Online‘s 50 million. Since then the gap between the NYTimes and the Guardian on the global scene has shrunk; in May the British heritage title had attracted 49.9 million unique users worldwide, while the American stalwart saw 46.2 million access its online offerings.

Journalist Nicky Woolf attributes growing interest in the Guardian, particularly from readers in the United States, to a unique hybrid style: “it can be seen as sitting half-way between The New York Times and online-only outlets like BuzzFeed“. At the same time as the Mail Online has used interest in celebrity photographs and gossip to attract readers throughout the world, and the NYTimes “aim[s] to be [a] paper of record“ the Guardian has aimed for a balance between lifestyle-based content and more ‘heavy-weight’ articles and reports. In light of the positive consumer reaction to the site’s latest scoop, guardiannews.com is bulking up its team of 29 U.S based journalists. Investigative journalist Paul Lewis has joined the Guardian‘s team in Washington while Nick Davies, who worked for years to uncover the phone hacking scandal that rocked Britain’s news media, will be heading to the title’s New York offices towards the end of the year.

Woolf highlights the Guardian‘s unique financial model as a reason why the publication is able to expand its digital offerings at a time when other media organisations may feel obliged to scale back their operations. The Scott Trust, the Guardian Media Group’s sole shareholder, created in 1936 to ensure the “financial and editorial independence of the Guardian in perpetuity“. It is undoubtedly true that without the financial support of the trust, the frequent and heavy losses incurred by the Guardian and sister title The Observer would have forced the two to close years ago. However, it is posssible that expansion at this time is more than a reckless move taken by a news organisation equipped with a financial safety net. An increasing number of news media outlets are touting expansion as key to their survival. Only last week, USAToday compared New Orleans title the Times-Picayune’s drastic cuts and reduction in print days with the strategy of development and expansion championed by the Orange County Register. Both papers had been in dire financial straits, but whilst attempts at cost-reduction have left the Times-Picayune in a weak position to defend itself against the challenge mounted by rival The Advocate, the Register’s bid for expansion has seen it employ an additional 175 journalists. What has been called the Registers‘s “grow grow grow” mantra is rooted in the belief that quality content will attract readers, who in turn attract advertisers.

Quizzed in April by GigaOM/Paid Content’s Mathew Ingram on the subject of how to monetise the Guardian‘s growing U.S audience, editor-in-chief Alan Rusbridger declared that the title was open to the idea of paywalls, but that it was unlikely for the time being that it would introduce any sort of “barrier” around its content. The key source of income for the online publication, after the Scott Trust, will likely continue to be advertisers attracted by the increasingly extensive reach of the Guardian‘s online news service.