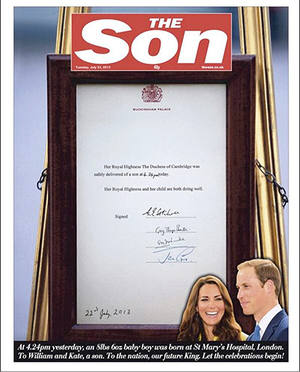 Magazine publisher Future made an early bid to become the first port of call for baby Cambridge news with an iOS app developed to commemorate the royal birth. Free to download, “Royal Baby” promised to provide keen royal-watchers with the first pictures of the baby and the latest news and Twitter updates. In-app downloads costing 69 pence would grant access to archives and photo-galleries of the royal aunts, uncles and grandparents. Aware that the appeal of the app could dwindle in the days following the birth, Future also promised that “Royal Baby” would continue to document the youngster’s development, updating content to include coverage of his “first steps, public appearances, royal visits.” Not only then is the youngster’s birth deemed newsworthy, the earliest stages of his life are also offered up for public consumption. Should this be an attitude shared more generally by members of the press, the media at large could find information about the future king severely restricted by the royal family. Speaking to the Washington Post the Guardian’s media commentator Roy Greenslade observed that “William hates the press and will show even less accommodation once the baby is born.”

No news is no news

Of course a “new media” baby doesn’t just have apps to contend with. This royal birth was remarkable not only for the speed with which the latest update could be communicated but also in terms of the sheer demand for exclusive information.

Summer marks the start of silly season in Britain, the time when Parliament closes for its annual six-week break and killer chipmunks dominate the front pages. Media outlets in general and 24-hour news services in particular often struggle for content during this time of year, and no doubt hoped that the birth of William and Kate’s baby would inject some excitement into their summer output.

The problem with such a hope is that pregnancies are rarely a rollercoaster of excitement for anyone except those directly involved. With the royal family reluctant to confirm a fixed due date, journalists and photographers began assembling in front of the Lindo wing of St Mary’s Hospital at the beginning of July. Their arrival marked the beginning of an almost month-long wait.

During this time and throughout the final hours of the duchess’s labour, news was replaced with speculation over when the baby would arrive, its sex, its name and, bizarrely, its star-sign personality. The BBC’s Simon McCoy drew attention for his coverage of the event, with statements recognizing the lack of factual basis for much of what was being reported: “plenty more to come from here of course. None of it news because that will come from Buckingham Palace. But that won’t stop us” he said to camera, before adding “we will be speculating about this royal birth with no facts … at the moment.”

While no one will be happier than the Duchess of Cambridge that the wait for the royal baby (during the hottest summer Britain has seen for seven years) is over, the reporters camped outside St Mary’s might be forgiven for breathing a sigh of relief when the child arrived.

When the news that the duchess had gone into labour finally hit the headlines, the press went into overdrive. In order to avoid offending the sensibilities of its republican readers (or, more generally, anyone looking for an escape from wall-to-wall royal baby coverage) The Guardian installed a button on its website that would allow readers to filter out any coverage of the unfolding events. The birth also allowed the rest of Britain’s newspapers to be rather more decisive in their statements of support, or otherwise, for the royal family. The Telegraph and The Sun were typically enthusiastic about this latest addition to the Windsor clan, respectively declaring that “Everyone can celebrate a child born to be king” and announcing that “Britain’s love for the Queen has never wavered much in 61 years”. The Mirror meanwhile wrote of the nation’s “joy at our royal boy”, but also published an article by staunch republican Brian Reade. Private Eye once again displayed the kind of incisive analysis of the news that has made it such a stalwart of the British press.

Whatever their editorial line might be, newspapers across the UK will be hoping that their coverage of the event will provide a boost in sales. British national titles saw a sales increase of around 25 percent for their royal wedding editions in 2011 and with details of the baby’s name yet to be released, there’s no telling how long they can maintain the public’s interest in this latest royal fanfare.