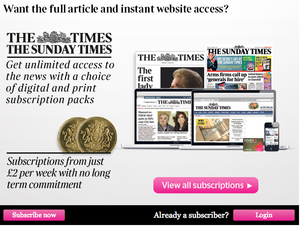 However, the unmetered, “anti-social media” model has significantly affected readership. The Times is now the least-read “quality” newspaper in the U.K., according to the National Readership Survey’s PADD report, covering 2012. With 5,506,000 print and digital readers at the conclusion of the survey, the Times had a smaller audience than the Independent (6,336,000 readers) and the London Evening Standard (5,876,000), according to The Wall Blog. At 12,729,000, the Guardian’s circulation was more than double that of the Times.

But Darcey stressed that reach was a fair trade for digital subscription revenue. The Times wasn’t interested in their its unpaying readers, who tend to “flit” about and do not offer real value, he said.

“What have we really lost? A long tail of passing trade, many from overseas, many popping in for only one article, referred by Google or a social media link, not even aware they are on a Times or a Sun website, wholly anonymous,” he said at the Times CEO Summit on Tuesday.

“[…] This reach doesn’t generate any meaningful revenue, and the pursuit of it undermines the piece of the business that does make money. If your purpose contemplates still being here in five to 10 years’ time, then the choice seems clear: it is better to sacrifice reach and preserve sustainable profitability.”

The Times’ circulation is low but growing, with 13,000 new subscribers in the first half of 2013, the Media Briefing reported. This addition brings digital readership up to 140,000. Total circulation now surpasses July 2010 figures, a fact “which is regarded by News UK executives as the true marker of success,” Media Briefing’s Patrick Smith wrote. Most digital subscribers access The Times on tablets and spend an average of 40 minutes per day with the e-edition, The Australian reported.

The newspapers’ perks for subscribers may have perhaps prompted a spike in digital circulation. In addition to Times+, a membership program that offers events such as film screenings, the Times has been selling the Nexus 7 tablet for £50 with an 18-month digital subscription, CNET reported.

The Times further limited access last month when it shut down its opinion Tumblr, opting to move all its commentary behind the paywall. While the Tumblr gained 66,000 followers in its year of existence, “it wasn’t driving traffic back to the site,” Nick Petrie, the Times’ social media and campaigns editor, told Nieman Lab. “The idea is that everything we publish is worth being paid for,” he added.

Darcey said that growing free readership is only “good for the ego” and isn’t complementary to the Times’ mission, Press Gazette reported. Not charging for digital content “seems pretty silly,” he added, wishing open sites such as the Guardian “the best of luck.”

“After a number of false starts and short-term fixes, many in the industry are waking up to the reality that there are real problems with giving your product away for free over the Internet,” Darcey said.

News UK title The Sun is due to a erect a paywall in August, just in time for the launch of Premier League football highlights on the website, Press Gazette reported.

New digital subscribers have not allayed all the Times’ financial woes. Facing a £28.7 million loss for last year through 1 July, the Times recently announced forthcoming layoffs of 20 staffers (less than 10 percent of the editorial team), the Guardian reported.

The Times’ financial situation has become increasingly urgent since News Corp.’s split, as the newspaper formerly relied on the company to balance out losses. “The era of being subsidised is coming to an end,” Times editor John Witherow said when announcing the layoffs in June.

“So while the past two years have not been an easy time in the newspaper business, focusing primarily on things that people in the media shouldn’t be doing,” he said, “they have also helped to remind us of the unique contribution newspapers still make to life in Britain.”