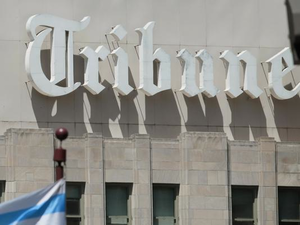 “Tribune Co. is lifting a page straight from the playbook of billionaire Rupert Murdoch” reported Forbes, while The New York Times wrote that the Tribune Company, which publishes major daily newspapers including the LA Times, had “followed the example” set by News Corporation. And yet, though the decision to spin off a single company’s concerns into two distinct entities is the same, details on the strategies to be adopted by the newly-independent publishing arms appear to have very different ends in sight. True, when Rupert Murdoch revealed that his company was to split, speculation was rife that the media mogul was planning on selling some or all of his news assets. Recent announcements about the publishing company News Corp’s plans for digital growth and expansion, combined with a parting gift of $2.6b and the annulment of any outstanding debt, suggest however that news publishing remains an important long-term investment for the Murdoch media empire.

The Tribune Company, on the other hand, will apparently be rather less generous with the Tribune Publishing Company, the future home of its soon-to-be isolated newspaper interests. Properties owned by Tribune Co.’s news titles and assets directly linked to them, such as syndication outfit Tribune Media Services and the still-profitable online-classified sites CareerBuilder.com, Cars.com and Apartments.com will be incorporated into the broadcasting unit. Doctor revealed that the new newspaper company will instead be left with “the assets that will lose another five to 10 percent of their print advertising this year, and will likely continue to show overall revenue decline.”

Tribune Co. itself touted the proposed split as “the latest step in the transformation of the dynamic media company” and Tribune CEO Peter Ligouri insisted that “the separation is designed to allow each company to maximize its flexibility and competitiveness in a rapidly changing media environment,” but it seems evident the news publishing arm is more of a hindrance than a help to the company’s plans for the future. Tribune newspapers have remained profitable during the past five years and even produced more revenue than the company’s broadcast assets over the course of last year, but a news title sale has been on the cards ever since Tribune Co. emerged from a four-year period of bankruptcy at the end of 2012. Media companies are increasingly looking to expand into the world of broadcast television in order to extend their reach into new markets and benefit from a recent hike in the retransmission fees, as previously reported by the Editor’s Weblog.

Although this spin-off would not guarantee a quick sale of news titles (the paperwork alone for a corporate split would take months to file), it would not impede one either. Doctor suggests the decision to separate publishing from broadcasting might be aimed at delaying a response to a potential bid from the Koch brothers, who have been hinting for some time at their interest in investing in print publications. The Columbia Journalism Review opines that after this “liquidisation” of the newspapers’ assets the only hope for Tribune’s titles is a trophy buyer, and Rupert Murdoch has long expressed in interest in acquiring the LATimes and has given his new publishing company the financial means to make acquisitions in the near future.

It seems likely that Tribune Co.’s most prominent news titles will be capable of attracting the interest of a fair few media moguls, but until a decision is made to sell them off, Chicago Tribune and co. face a difficult and uncertain future without the revenue generated by all of their most profitable assets.