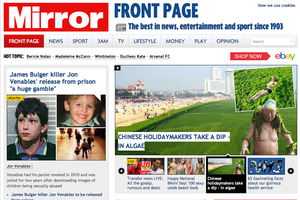 Adding to the 22 current digital-only staffers, the new hires will work toward a goal of 2,000 web stories per week, a jump from the 900 the newspaper group currently publishes, The Guardian reported.

The publisher of the Mirror and Sunday Mirror may hope to use The Sun’s forthcoming paywall as an opportunity to expand readership. This emphasized focus on digital operations, with free weekday e-editions of the Daily Mirror and Daily Record for U.K. readers, could help tempt Sun readers.

April marked a turning point for the Mirror Group’s web operation after the site saw a 30 percent jump in monthly visitors. The Guardian suggested the spike may have been due to the coverage of Grand National and an exclusive video from North Korea.

“Since integrating the seven-day print and digital teams earlier in the year, we have dramatically improved our online traffic — but in order to take the next big step we need to invest,” said Lloyd Embley, editor-in-chief of the Daily Mirror and Sunday Mirror.

These hirings will see through formerly announced plans to layoff 90 editorial staffers to make room for 52 new digital roles. The strategy was part of an initiative to “become a fully-fledged, digitally-focused news operation,” Trinity Mirror Editorial Director Neil Benson said in January.

Other publications have been creating new digitally-focused positions. Last month the Express Newspapers, including the Daily Express, Sunday Express, Daily Star and Daily Star Sunday announced 40 new digital editorial posts, though the majority of them are to be filled by current print staffers, according to The Drum. The Guardian’s new digital strategy director, Wolfgang Blau, assumed his post in April, and Troy Young was recently appointed president of Hearst Magazines Digital Media.

Conversely, in October the Orange County Register hired 50 new editorial employees to focus on its print operations. Nieman Lab reported that many expressed shock at the decision, with one reader calling it “another nail in the coffin.”