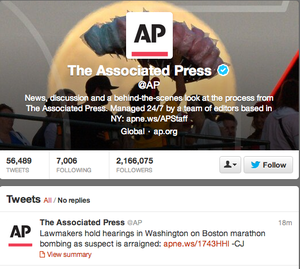 The recently-released study by University of Edinburgh and University of Glasgow researchers compared tweets and wire reports from a 77-day period in summer 2011. Analysis found that Twitter broke news stories first in only eight of 27 major events during this time period. The two tied four times, and the newswire led on 15 occasions.

As the chart below illustrates, most of the “leads” were negligible — a few seconds to several minutes. But for many instances in which Twitter scooped the newswire (not included in the chart), the delays were more sizeable, with the median at 53 minutes. These occurances were rare, less than 1 percent of the 27,000 total analyzed events.

This information led the researchers to suggest that Twitter is well-suited for “less well-known events,” particularly hyperlocal activity. The study provided the example of a minor vandalism during the London riots, which was reported on Twitter but not the wires. While Twitter covers 95 percent of all events written up by newswires, the wires miss “a long tail of minor events” reported on Twitter, the study said.

“My prediction is that … news services will simply use Twitter as another dissemination vector,” author Miles Osborne told Co.Exist. “In my opinion the broad findings will continue. For example, news of some border treaty will never surface first on Twitter. Likewise, someone being robbed in downtown Boston might well appear first on Twitter.”

Among the events that Twitter broke first, about a third were sports-related, as fans tend to tweet real-time updates. Twitter often also led in disaster-related coverage but even occasionally also in business and political news. However, such instances were unusual.

“In general, while Twitter can break news before newswire in limited cases, for major events there is little evidence that it can replace newswire providers,” the study concluded.

The results suggest that while Twitter is no real competitor to the AP and other newswires, it has untapped potential for hyperlocal reporting, community policing and local search.

Though the study pinned Twitter and the newswire against each other, the two can be complementary. Newswires update faster than Twitter can, former Reuters Social Media Editor Anthony De Rosa pointed out,  but speed isn’t the only barometer of journalistic success.

News organizations must stop seeing Twitter as a threat, Digiday’s Josh Sternberg wrote. In fact, in 2011 the AP admonished two reporters for breaking news of their arrests on Twitter, as doing so violated AP’s policy of publishing to the wire first. Reuters has taken the opposite approach, encouraging reporters to tweet before filing stories to the wire, according to Digiday.

The question of whether to tweet breaking news or wait to file it is a reprise of newspapers’ old dilemma on whether to publish online or “save” good material for the print edition, Ingram noted. But when a news outlet waits to publish news, it’s essentially forfeiting its opportunity to break it, Reuters reporter Robert MacMillan said.

Moreover, as the Boston bombings exemplified, tweets are not fact-checked with the rigour applied to journalistic content, discounting the social networking site as a real competitor to newswires. Ingram mocked the idea of a news organization being threatened by “a 140-character post or two.”

“Where social networks like Twitter may have the instant feedback loop or even reach, newswires still have the editorial process of credible information distribution,” Sternberg wrote. “Media organizations who purchase newswire feeds aren’t about to give them up for Twitter any time soon.”