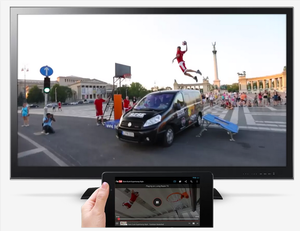 The smart TV alternative streams content from laptops running Chrome and iOS and Android smartphones and tablets, GigaOm reported. The device plugs into the HDMI port of a TV and turns mobile devices into a remote control. It will sync up with video apps such as YouTube, Google Play Movies and Netflix, and Google will eventually bring the functionality to independently-developed apps, such as those of news organizations. Some news outlets such as The New York Times already post videos on YouTube, further facilitating their Chromecast application.

The concept is not a new one, but the price is. Apple TV and Roku offer similar functionality, with Apple having sold more than 13 million units and Roku more than 5 million in the US, according to Forbes. But the competitors’ devices sell for US$ 99, which while affordable is certainly not the “impulse buy” price of Chromecast.

Chromecast will accelerate Internet video’s expansion and could slow the spread of smart TVs, which connect to the web without supplementary devices. Though media analyst Ken Doctor proclaimed smart TVs the “next screen” in 2012, they haven’t yet gained much traction. They currently reach about 10 percent of households worldwide, WAN-IFRA previously reported. Experts had predicted that by 2015, 55 percent of TVs would be “smart,” but the low-cost option of Chromecast could be a game changer: Why buy a new TV when adding Internet connectivity is just about the same cost as a night out?

That’s good news for news organizations working to beef up their video offerings. Analysts had previously argued that web video consumption habits meant traditional news organizations will never be serious competitors to TV. HuffPost Live lost three hosts in two months to TV, suggesting a lingering preference for video news on TV versus on the computer.

So experts previously emphasized that traditional news organizations should focus on creating 3-to-4-minute videos rather than trying to replace the nightly news. “Thank God we’ve moved away from the time when you think you can just put television online,” said David Hayward, head of the journalism programme at the BBC College of Journalism.

But now the TV industry seems up for grabs: From March 2012 to March 2013, a record-breaking 80,000 pay-TV customers cancelled their subscriptions, and broadcast ratings for 18-to-49-year-olds fell 17 percent this winter. Chromecast will only increase the appeal of cord cutting.

With Internet video now just a click away from the living room big screen, news organizations have a real chance to disrupt local TV and serve as a true substitute for broadcast news.

At a glance: How are news organizations and publishers expanding their video operations?