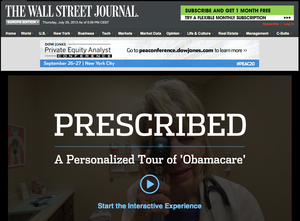 The four-minute video took viewers on a “personalized tour of Obamacare,” beginning on 1 January 2014, the day it is set to take effect. The point-of-view experience assumes the perspective of blue-collar and white-collar workers alike and even takes viewers on the operating table. All the while, the video promotes links that provide in-depth information on particular issues.

“The interactivity adds another layer,” Mann told Journalism.co.uk. “And that was really quite exciting because in news, and particularly in news video, we are normally condensing incredibly complex issues into very short periods of time. What interactivity allows us to do is to really expand on that and allow the viewer to expand on areas where they may need some extra background detail.”

WSJ isn’t the first news organization to use interactive video effectively. Other key pioneers include Canada’s CBC News, which won a Webby Award for its interactive video simulation of a kidnapping investigation, and Al Jazeera, which was also recognized for its video and accompanying interactive transcript of the 2012 U.S. vice presidential debate in Danville. The Washington Post also jazzed up video of vice presidential nominee Paul Ryan’s speech during the Republican National Convention with an interactive feature that tracked Twitter response.

Mann and multimedia producer Jarrard Cole suggested that such interactive videos shouldn’t be out-of-reach to other news organizations, Journalism.co.uk reported. Most of the time producing WSJ’s piece went into planning and writing the script. Actual filming was done using a hockey helmet with a strapped-on DSLR, and WSJ outsourced the interactive coding to Zentrick, which took about a week to produce the final product.

“One of the reasons we approached this in the way we did was the traditional news format doesn’t suit all the types of stories we have now, particularly when we have the internet at our disposal,” Mann told Journalism.co.uk, later adding that the newspaper is rolling out interactivity to the rest of its sections. “ … Traditional methods that we have used in the past are designed to broadcast into people’s homes and now that people are engaging with us on different platforms, on the go, we need to think about how we do that.”