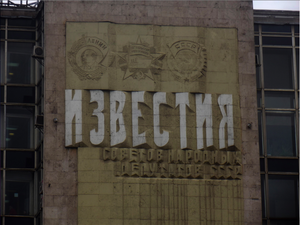 A 24-hour news channel, the name of which has not yet been released, will carry the vast majority of the news content produced by Izvestia’s editorial team and will also be broadcast via the LifeNews website. An article from The Moscow Times reports that News Media, the company that publishes Izvestia, will probably launch the channel around the end of August.

Founded in 1917, Izvestia is one of Russia’s oldest news titles, and is widely viewed as being a mouthpiece for the country’s political powers. National Media Group – which owns News Media – is owned by Yury Kovalchuk, a close ally of President Vladimir Putin. The transition to television is the second time in the paper’s recent history that drastic changes have been made to its editorial output. Back in 2011, 60 per cent of Izvestia’s journalists were shown the door after the paper was placed under the control of tabloid publisher Aram Gabrelyanov. According to The Moscow News, the change in management “sparked a flurry of debate on the politicized media scene” as fellow journalists from opposition titles struggled to sympathise with employees of a newspaper felt to have kowtowed to the Kremlin.

Now, two years later, Izvestia is preparing itself for fresh upheaval. The news channel will be directed by Alexander Potapov, the title’s former editor-in-chief who both replaced and was replaced by Alexander Malyutin. Apparently unhappy with Gabrelyanov’s plans to merge Izvestia with the tabloid LifeNews, Malyutin resigned last year, but has returned to his former role this week: his first act after returning to his post was to announce the news of the shift to a TV format.

The switch is being cast as a necessary change to adapt the title to the pressures of the digital era. Media analyst Alexei Pankin told the Moscow Times that mass media brands in Russia ought to try anything to remain profitable, though there is no way of telling which experimental models will succeed. That said, the combination of Internet transmission and television format just might work in Russia’s media environment. Television remains the most popular news source for Russians, according to the BBC, and digital audiences are growing. At the Digital Life Design conference last year Ahmet Özer, head of Trader Media East, one of Russia’s biggest publishers, revealed that 25 per cent of his company’s revenue came from digital media. This figure was expected to rise to more than 50 per cent by 2015, TheNextWeb reported.

Even stripped of the majority of its news content, the newspaper itself will not disappear. Instead, its pages will be dedicated to long form articles focused on in-depth analysis and works of investigative journalism. What remains to be seen is whether a national newspaper offering only these elements will be able to survive or even thrive in the long term.