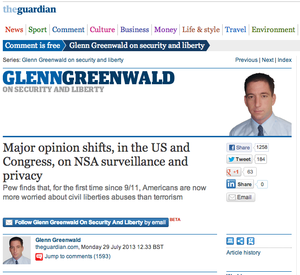 The announcement asks for feedback and emphasizes the fact that the site is just trialling the feature for now. While currently only available for specific authors and features, including tech reporter Jemima Kiss and the running blog, the Guardian says if it receives enough positive feedback Notifications will be rolled out for all series and authors. The subscribe button, pictured in the screenshot on the left, is only available on desktop now, but it may be extended to mobile soon.

“We know that some of our users do not follow Twitter feed or our Facebook pages and would prefer an email format,” the announcement says. “Some people just prefer email and we’d like to see how this works out for them.”

Subscribing is linked to users’ free Guardian IDs, and the announcement adds that “this is just the beginning of being able to personalise your experience with the Guardian.”

This move is part of a growing trend of publications capitalising on reporters’ personal brands and followings. The Guardian has also joined Quartz and The Atlantic in adding Twitter “follow” buttons to reporters’ bylines, though this feature is only available for a select few authors on the Guardian site. Moreover, USA Today has encouraged reporters to forget traditional lessons in journalistic objectivity and instead “have a unique stand on how you write,” Publisher Larry Kramer told Ad Age in April. The outlet also plans to recruit strong personalities to support Kramer’s vision of a newspaper as a choir: All individual reporters have strong voices and, hopefully, their own fans on social media.

Additionally, media commentator Mathew Ingram has long advocated for publications to offer subscription bundles centered around authors, which is exactly what De Nieuwe Pers in the Netherlands is doing.

Of course, publications benefit from having popular personalities on staff — at some points, Nate Silver was responsible for 20 percent of traffic on NYTimes.com —  but the rise of “free agent journalism” makes it more likely for reporters to uproot their franchises and their followings when they get better offers, as Silver so publicly did. But by supporting rather than stifling journalists’ personal brands, news organisations may be less likely to have the “Andrew Sullivan problem” of reporters branching off on their own.