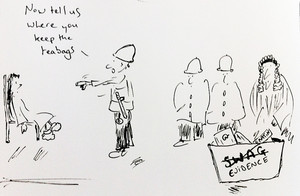 Rocchi’s crime? Having exposed suspected plagiarism at the heart of the University of Neuchâtel. His investigations, published by Le Matin newspaper, led the Director of the Institute for Business at the faculty of Economics to file an official police complaint for defamation, slander and violation of official secrecy. Acting on this, prosecutor Nicolas Aubert and his team swooped.

The Swiss press is up in arms. “Shocked by the methods used,” read an editorial in Le Matin the following day, “we consider that the means used, the intrusion into a private residence and the interrogation of our colleague’s wife are, to say the least, disproportionate.”

At the hotel in Locarno from where he was covering a film festival, and just hours after his home was raided, Rocchi – having sought advice from Le Matin’s legal team – surrendered his personal computer to police. In an effort to protect his data, lawyers demanded seals be placed on all the seized items pending a court decision on whether the information can be extracted and examined.

“To the knowledge of any lawyer or press specialist,” claimed Sandra Jean, editor-in-chief at Le Matin, “never before has the search of a journalist’s home taken place in Switzerland. Why should this particular case lead to such measures?”

Rocchi’s first revelations were published in September 2012, after he reported serious problems at the faculty of Economics. Smoldering conflicts between teachers, assistants in turmoil, the general atmosphere was far from genial. Despite an internal investigation ordered by the Dean of the University Rocchi’s investigations led to further scandal, notably accusations of plagarism and doctored resumés. According to Le Matin, after a thousand hours of inquiries the University concluded the Council of State should open an investigation. This was in spring, and the affair had since dropped from the official radar – until, that is, the early-morning wake up call at Rocchi’s home.

Source protection and respect for the profession of journalism are immediate issues of concern for lawyers surrounding the journalist, argues Stephane Riand on French news site Mediapart. Accepting the arguments forwarded by the prosecutor – who is on record as stating the response was wholly proportionate – is, according to Riand, “to sack the right to know, and bury the freedom of the press.”

“Daring to invoke such extra-judicial proceedures, these proceedings off-the-law, making them appear to confirm with the law, invoking a procedure that is entirely proportionate, justice has chosen to guillotine the Fourth Estate, to discredit it, amputate an essential element of democracy, to empty press freedom of all meaning. All under the pretext of a technical rule of law.”

For Rocchi, the wait is now on to see whether the courts will rule for the protection of sources or against the profession of journalism. The ensuing legal battle may have only just begun, but the fundamental issues at stake – and the galvanising effect this has so far achieved within the Swiss media fraternity – will ensure the spotlight remains on press freedom for the foreseeable future.