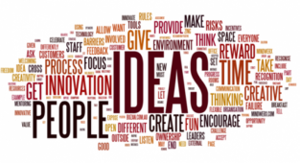 “We are in the golden age of journalism, the most exciting age the media has known” was how Adam Thomas, co-organiser of Hacks and Hackers, Berlin kicked off his contribution. What a contrast this opening was to the usual contextual introductions about the awful state of the profession. Thomas is an award winning innovator who has just been hired as Storyful’s new Business Development Director, charged with shaping and developing their global business.

But there will be a lot of casualties, he warned. Those who will survive will be the ones who build innovation from the very bottom up, those who engage developers with journalists and promote two way communications to build practical tools that enable open, ethical journalism.

WAN-IFRA organized the Ideathon to brainstorm ideas with the media tech community as ground work for a Hackathon to be held in Berlin on the weekend of 5 and 6 October. We are seeking ideas and solutions to help shape progressive and sustainable news businesses that have at their core excellent, ethical journalism.

For the uninitiated, a hackathon is not an illegal effort to break into computer or mobile phone or computer networks. Rather it is an event where computer developers, journalists and designers get together and compete in teams to design innovative software solutions and tools to solve a common problem or challenge. They have proved highly effective in coming up with quick apps and software for use by journalists and newsrooms.

The Berlin Hackathon is taking place on the eve of the World Publishing Expo 2013. The winners will be announced at the opening of the Expo on 7 October at the Berlin Messe. The Expo is the WAN-IFRA’s annual technology event where suppliers, publishers and innovators showcase emerging technologies and new products – for publishing in print, online or on mobile. This year the Expo includes a number of strategic conferences and presentations on open platforms about the newsroom and workflows, social and mobile platforms, revenue generation and print technologies.

The hackathon is part of a series organized by WAN-IFRA to promote innovation and experimentation and to find digital solutions to some of the newspaper industry’s challenges – both within the newsroom and on the revenue and distribution side.

There will be a hackathon in Bangalore on 13 September as part of the Publish Asia conference and the final day of the Newsplex Asia News App Challenge will take place in Singapore on 12 October with the results announced at Digital Media Asia in Kuala Lumpur, Malaysia on 14 November.

Details of how to enter the hackathon will be announced later this month.