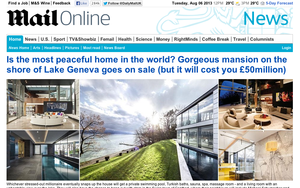 While there were a number of major stories in July, including the train crash in Spain, a verdict in the Trayvon Martin murder trial in the US and of course the birth of the royal baby on 22 July, MailOnline stressed that it publishes hundreds of items of content each day. “No one article represented more than 4.7% of total page views on their record-breaking day,” the statement notes.

The UK’s Press Gazette reports “MailOnline’s previous record monthly traffic was May when, according to ABC, it reached 129 million unique browsers worldwide and an average of 8.2m a day.”

“This is a massive jump in traffic given MailOnline’s already tremendous audience – an increase of 13.4 million browsers month on month – more than half the total monthly traffic at Independent.co.uk,” writes Mark Sweney in the Guardian.

“I am pleased that each month we grow our audiences to new highs not just in the UK, but in the United States and around the English-speaking globe,” states MailOnline Publisher Martin Clarke, in the press announcement.

In June, Kevin Beatty, CEO of DMG Media in the UK, part of DMGT, which owns MailOnline and its print companion, The Daily Mail, spoke during WAN-IFRA’s World Newspaper Congress in Bangkok about how news organizations can successfully make the transition to the digital world.