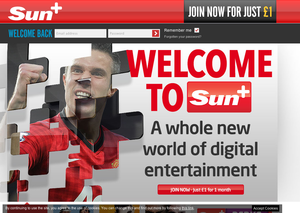 Football is a major component of Sun+’s strategy. The new Goals app is centered on clips from Premier League games, for which News International reportedly paid £20 million to show for three years. The company also recently purchased FA Cup digital rights, and next year the Goals app will begin showing clips from that as well, the Guardian reported. “Hopefully you need never look at another football app again,” Brown told Journalism.co.uk. The tabloid is also launching a “near-live” morning sports news show, which will air seven days a week, according to Journalism.co.uk.

Beginning this Sunday, newsstand buyers will get digital access via codes printed on the newspapers. The codes, unique to each one of the more-than-2-million copies each day, will at first provide for a month’s worth of online access but eventually will be phased out to a collect-20-per-month plan for unlimited access, Press Gazette reported.

To sweeten the offering, Sun+ also offers deals worth around £200 per month. New subscribers will get three months of free music on Napster and £5 off kids’ clothes at BHS, according to the Guardian. Sun+ is in talks to launch a book club through its associate Harper Collins, and a movie club is also being considered.

The Sun has been counting down to Sun+’s launch online, and some thought the print edition’s special “This Is Our Britian” issue yesterday was a publicity stunt for the paywall launch.

After the paywall was announced in March, some were skeptical. But Mike Darcey, CEO of News UK, seems realistic about traffic drops, and he said that non-paying readers are only “good for ego.” He hopes revenue will make up for lost reach, as was the case for The Times, which saw a 91 percent traffic drop after its paywall installation three years ago. He also suggested that loyal, paying customers supersede the value of unique visitor figures, and “having a closer relationship [with customers] is very important,” he told The Media Briefing.

But analysts quoted in the Guardian predicted that The Sun will need 300,000 subscribers just to offset lost advertising revenue. Adding to pressure, The Sun needs to make up for its big-ticket spend on Premier League rights.

The Mirror Online, which broke traffic records last month, seems to be stealing some of The Sun’s audience, 24.9 million visitors last month. The Mirror hopes to capitalize on The Sun’s paywall, and in early July it announced plans to double digital editorial staff and web editorial output.

A recent Reuters Institute for the Study of Journalism report found that the percentage of UK citizens who pay for news is on the rise, up from 4 percent in 2012 to 9 percent this year. The study reported that 14 percent of those who don’t pay for online news are open to the idea of doing so in the new future. Sun+ will suggest how many are really ready to make this leap.